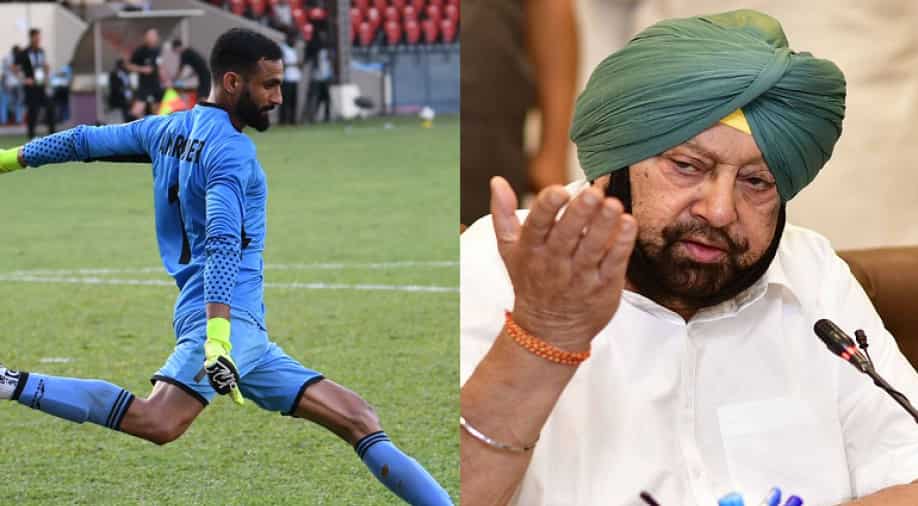 Indian football team's goalkeeper Amrinder Singh took to Twitter on Thursday (September 30) to issue a clarification after being confused for the Chief Minister of an Indian state Punjab. Amrinder, who plays for ATK-Mohun Bagan in the Indian Super League (ISL), urged Twitter users and journalists to not tag him in posts related to the ex-Punjab CM - Captain Amarinder Singh.

Captain Amarinder Singh has been garnering headlines recently after resigning as Punjab's Chief Minister on September 18. The senior political leader's exit as the CM and the Indian National Congress party has grabbed headlines in the mainstream media as well as social media.

However, his exit seems to have created problems for someone who is not related to Punjab politics by any means. Goalkeeper Amrinder, who claimed he is being tagged in tweets related to the ex-Punjab CM, urged Twitter users to stop tagging him and confusing him for the ex-Congress leader.

"Dear News Media, Journalists, I am Amrinder Singh, Goalkeeper of Indian Football Team and not the Former Chief Minister of the State Punjab. Please stop tagging me," the India goalkeeper wrote on his Twitter handle.

Former Punjab Chief Miister Captain Amarinder Singh, who is reportedly considering starting his own party after leaving Congress, responded to the Indian goalkeeper's tweet and wished him luck for his games ahead.

"I empathise with you, my young friend. Good luck for your games ahead," wrote the former Punjab CM. 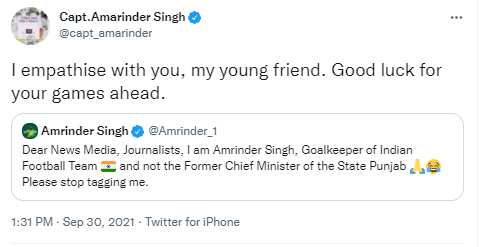 Also Read: R Ashwin reacts sharply after rumours of him complaining against Virat Kohli to the BCCI go viral

Who is Amrinder Singh?

Amrinder Singh is a 28-year-old Indian footballer who plays for the Indian national football team and the ATK-Mohun Baga in the ISL. Amrinder hails from Mahilpur, Punjab and has seven appearances to his name for the Blue Tigers. He has also played for Mumbai City in the ISL.