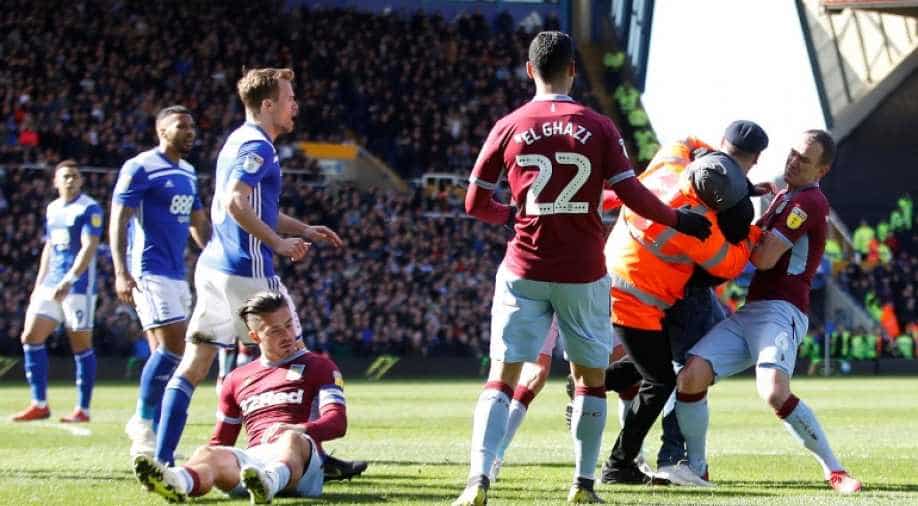 Aston Villa's Jack Grealish sits on the floor as the fan that attacked him is restrained by a steward and Aston Villa's Glenn Whelan. Photograph:( Reuters )

Paul Mitchell, a 27-year-old former pub employee, had pleaded guilty at Birmingham Magistrates' Court to charges of assault and encroachment.

A Birmingham City fan was jailed for 14 weeks on Monday for running onto the field of play and punching Aston Villa's Jack Grealish during a Championship (second tier) match at the weekend.

Paul Mitchell, a 27-year-old former pub employee, had pleaded guilty at Birmingham Magistrates' Court to charges of assault and encroachment.

"The sentence must act as a punishment and a deterrent to others in order to send a message to the public and fans and players like Mr Grealish who should be protected at all times," the Birmingham Mail quoted magistrate Alison Fisher as saying.

Mitchell was also banned for 10 years from attending any soccer match in Britain and ordered to pay 100 pounds ($130.95)compensation to Grealish as part of costs amounting to 350 pounds.

The court heard that Mitchell's family had left Birmingham after receiving death threats.

The incident, coupled with two others in England and Scotland over the weekend, had raised fears for player safety.

The English Football Association said it had written to Birmingham and Arsenal, where Manchester United defender Chris Smalling was shoved, seeking details of the security measures they had in place.

Mitchell's lawyer said his client could not explain his actions and had intended initially to run onto the pitch to whip up the crowd.

Grealish was punched to the side of the face by Mitchell during Villa's 1-0 win at St Andrew's on Sunday.

The 23-year-old fell to the turf as a steward and Villa players Glenn Whelan and Tammy Abraham caught Mitchell and dragged him away.

A statement from Grealish was read out in court, saying the player had been "shocked and scared because if this person was brazen enough to get onto the pitch, what else could he do?"

Birmingham City welcomed the sentence and said they would not tolerate such incidents.

"What he did was unacceptable and has no place in football. The club can confirm that Mr Mitchell is banned from our home ground... for life," the club said in a statement.

"And nor will he have access to purchase tickets for away games involving Birmingham City Football Club, or have tickets purchased on his behalf."

City said they had also banned another supporter for life for "a series of vile and malicious Tweets on social media, relating to Jack Grealish and his family."