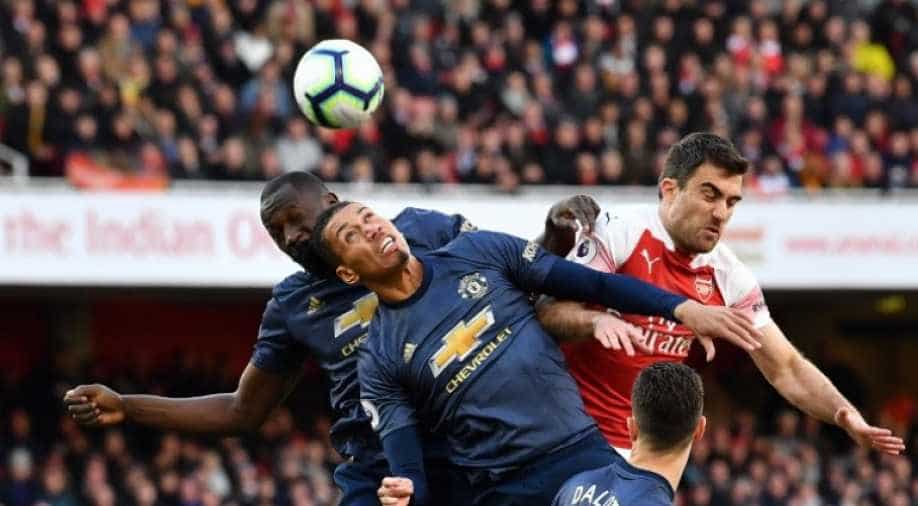 A man ran on after Aubameyang's goal and shoved United defender Chris Smalling.

Manchester United defender Chris Smalling was pushed by a pitch invader during a Premier League clash between Man Utd and Arsenal on Sunday.

After Pierre-Emerick Aubameyang penalty that made 2-0 in favour of Arsenal, a lone fan ran onto the field to celebrate with the players and appeared to make contact with United defender Smalling.

He then approached Arsenal players with his arms aloft before stewards took him off the pitch and he was arrested, according to Arsenal communications director Mark Gonnella.

"A man has been arrested on suspicion of common assault and pitch invasion following an incident during the Arsenal v Man Utd game at the Emirates Stadium today," said a Metropolitan Police statement issued Sunday.

"He is currently in custody at a north London police station."

After the match, Solskjaer insisted, "(There) shouldn't be a place that someone runs onto the pitch.

"We just have to make sure we play football and they (the fans) watch football."

The last thing we wanted to see today, another pitch invader, this time at the Emirates 🙄 pic.twitter.com/M5AZ6WO9T4

It was a view shared by Arsenal boss Unai Emery, who said, "I don't want that."

Sunday's incidents followed several recent episodes of hooliganism, including coin attacks on players and managers, in Scottish football, with Rangers captain James Tavernier confronted by a pitch-invading Hibernian fan after his side's 1-1 draw at Easter Road on Friday.

Earlier in the day in the second-tier Championship, Aston Villa midfielder Jack Grealish was punched by a pitch invader during a derby match at Birmingham City.