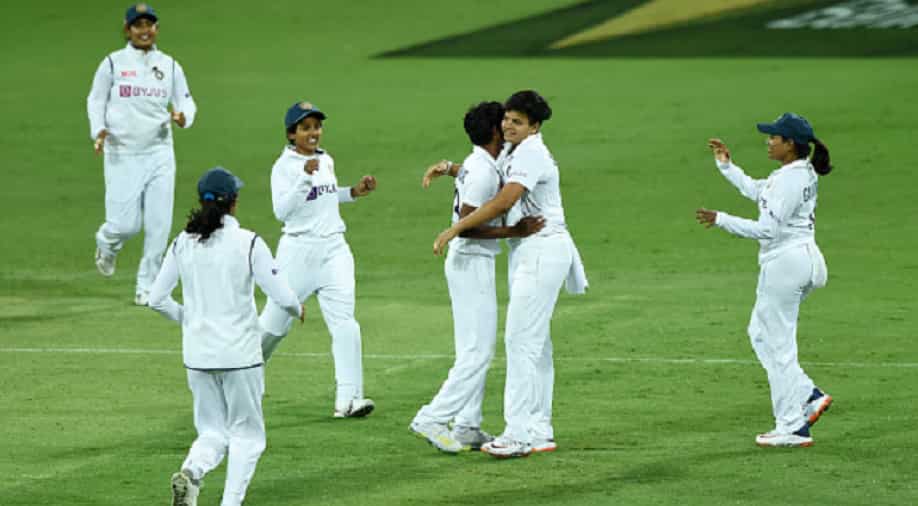 After India declared their innings at 377/8 with the help of Smriti Mandhana's 127, both Jhulan Goswami and Pooja Vastrakar took two wickets each for Australia to finish at 143/4 on Day 3.

Jhulan Goswami (2/27) and Pooja Vastrakar (2/31) sparkled on day three of the pink-ball Test at Metricon Stadium as Australia finished at 143/4 in 60 overs, trailing India by 234 runs and requiring 85 to avoid the follow-on.

Ellyse Perry (batting on 27) and Ashleigh Gardner (batting on 13) ensured that Australia didn't suffer more damage by batting out the 10.2 overs left in the first full day of play in the Test match.

After India declared their innings at 377/8, Jhulan gave the tourists a great start by hitting the top of Beth Mooney's off-stump as the batter tried to swing through the leg-side. Alyssa Healy and Meg Lanning stitched a 49-run partnership for the second wicket before Jhulan had Alyssa nicking behind keeper Taniya Bhatia in her second spell.

In the final session, Pooja had Meg dismissed with an lbw with a nip-backer. Replays suggested that there was an inside edge, but with no DRS in the Test, a displeased Meg had to march back to the pavilion. 17 overs later, Pooja had her second wicket of the day with Tahlia McGrath cutting straight to point.

Earlier, Deepti Sharma raised her half-century to carry forward the pace of scoring runs for India. She and Taniya Bhatia had an association of 45 runs stand in 170 balls to take India beyond 300. Taniya was the first wicket to fall in the day, becoming teenage pacer Stella Campbell`s first Test wicket after an outside edge carried to keeper Alyssa.

Pooja joined Deepti to take India past 350. During the 40-run association, Deepti registered yet another half-century, her second in three innings. Ellyse clinched her 300th wicket in international cricket as Pooja edged to a diving Beth at gully on the stroke of the dinner break. Taking Pooja`s wicket in the 143rd over of India`s innings made Perry the first woman to do the double of 300 wickets and 5,000 runs in international cricket.

In the over immediately after the dinner break, Deepti hit Stella for back-to-back fours before Stella struck to take her second wicket of the match by trapping the left-hander lbw for 66. The visitors batted for eight more balls before declaring their innings at 377/8 in 145 overs.

With just one day left in the Test, the possibility of draw looms high.