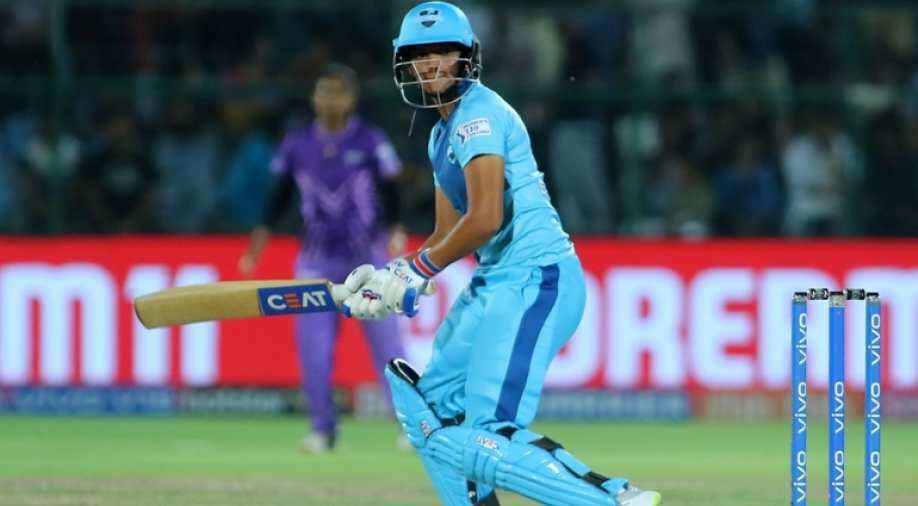 Harmanpreet Kaur in action during the final match of Women's T20 Challenge 2019 between Supernovas and Velocity. Photograph:( IANS )

The finale between Velocity and eventual champions Supernovas witnessed a crowd of over 13,000 people cheering both Mithali Raj and Harmanpreet Kaur's teams contesting in the low-scoring last-ball thriller

"It has been a long time since we have seen women's matches in Jaipur. It will be interesting what the crowds are like," former India women captain Shubhangi Kulkarni had told ANI ahead of the recently-concluded Women's T20 Challenge.

The three matches prior to the May 11 showdown at Sawai Mansingh stadium saw fewer spectators.

However, the finale between Velocity and eventual champions Supernovas witnessed a crowd of over 13,000 people cheering both Mithali Raj and Harmanpreet Kaur's teams contesting in the low-scoring last-ball thriller.

"Mostly in the major cities, we haven't had a good crowd. There were times earlier when we used to have packed stadiums. We had an England versus India match in Centurion in 2004 (which saw) a packed stadium. In 1976, we played a Test match at Patna and we had a full stadium. I think we need to pick the right venues to be able to attract the crowd. We need to think differently about women's games. Think of those venues where we will get full crowds," Kulkarni said.

Staging a full-fledged league may take some more time, given the concerns of BCCI over the depth of India's domestic pool of players.

'Use inter-school and inter-university tournaments to build base' India women's first captain Shantha Rangaswamy is of the view that inter-school state tournaments is where the base will improve.

"You need to have a wider and much larger pool of players to choose from. My worry is where is the wide base we are looking for to select? Even if they make 4-5 teams (for Women`s IPL), they have to work from the back end and popularise the game at the school level," Rangaswamy said in an interview to ANI.

"I feel we should coordinate with Indian universities and inter-schools and fix their tournaments in such a way that it doesn't clash with the BCCI tournaments because that is where the players are coming from. It's a feeder and we need to nourish the feeders."

"Right now inter-university is basically a shadow of what it was 30-40 years back. There was a very high level of standards then but now most of the girls are busy playing state. That's why there's a need for better coordination. Coming on TV, diving, taking a couple of catches, it's all good, people need that - I agree. But the larger picture is still hazy. That`s where we need to concentrate without ignoring this (Women's T20 Challenge), which needs to go on. The show must go on," Rangaswamy explained.

"Was BCCI willing to do this also? No! After 2017, things have changed. The perception has changed within BCCI itself. It has changed for the better. I`ll be very happy in the next 4-5 years if franchises come forward and we have a full-fledged IPL, but for that to happen, the next 5 years we need to do a lot of preparatory work. BCCI has in place T20 inter-state for juniors, for seniors, under 19 and 23. I still regret that BCCI has dispensed with inter-zonal -- that was the platform where we found high standards, more competition," Rangaswamy added.

"Now they are holding Challengers which I feel is a crazy move and I don't subscribe to that whatever be the merits. It can never ever replace inter-zonal because inter-zonal was (I can assure you) the pinnacle of domestic cricket. It's a sad story or whatever the reasons I don't know but I feel they must reintroduce inter-zonal for one-day as well as T20. Inter-zonal was the litmus test in domestic cricket because the pressure and standards were high, we must get that revived," Rangaswamy, a veteran of 16 Tests and 19 ODIs, said.

On the other hand, Kulkarni, secretary of the erstwhile Women's Cricket Association, said, "I feel the girls will adapt when they play more T20 games. If you see it has happened with the men's team. Initially, they were not prepared to play T20 Internationals. During the first World Cup in 2007, men were not prepared for it. But as they went along they all got better. In men's cricket, the more players are playing, the better they are getting."

"I feel once these girls start playing these matches, their skill level will get enhanced and they will start performing better. There is a lot of interest; people are following women's cricket right from the World Cup final in 2017. Since then, there has been an interest shown by not just spectators but even sponsors. Girls are now being managed by agencies, there are people giving them sponsorship. I definitely see a full-fledged IPL beginning," Kulkarni, who has played 19 Tests and 27 ODIs, added.

The women's T20 league offers a great platform to showcase talent and hone skills by rubbing shoulders with professional overseas players. With a stronger Indian base, the tournament is set to become more competitive, and, in turn, force franchises to invest more and make it a huge success.