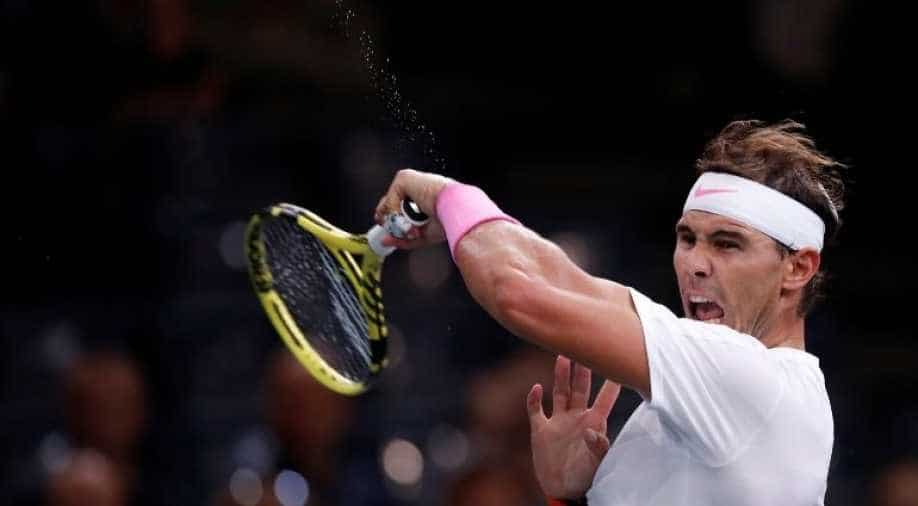 Rafael Nadal in action during his round of 16 matches against Switzerland's Stan Wawrinka. Photograph:( Reuters )

The Spaniard, converted two of three break chances to claim his 19th win in 22 encounters against the Swiss.

Rafael Nadal continued his quest for a maiden Paris Masters title with a no-nonsense 6-4 6-4 victory against old foe Stan Wawrinka to reach the quarter-finals on Thursday.

The Spaniard, who will take over as world number one from Novak Djokovic on Monday, converted two of three break chances to claim his 19th win in 22 encounters against the Swiss.

The 19-time grand slam champion will next face local favourite Jo-Wilfried Tsonga, who beat German Jan-Lennard Struff 2-6 6-4 7-6(6), making the most of his wildcard status in Paris.

"I think my game worked well. On the return today, for me, it was a little bit difficult," said second seed Nadal, who called a medical timeout because of a minor stomach bug.

"I think I didn't return as well as I was doing in previous days. But it's true that Stan always has a good serve, and difficult to read."

The result ended Wawrinka's hopes of qualifying for the season-ending ATP Finals, leaving only Frenchman Gael Monfils and Italian Matteo Berrettini with a chance to grab the last of eight tickets for the November 10-17 showdown.

Monfils, who needs to reach the last four to leapfrog Berrettini in the race to London after the Italian was eliminated in the second round at Bercy, beat Moldova's Radu Albot 4-6 6-4 6-1.

The Frenchman was a break down in the second set before he started to play more freely and breezed through the decider to set up a clash with Canadian Denis Shapovalov.

Top seed Djokovic had to dig deep in the opening set as he reached the quarter-finals with a 7-6(7) 6-1 win against Britain's Kyle Edmund.

The 16-time grand slam winner was kept on his toes before racing to victory to set up a meeting with Greek seventh seed Stefanos Tsitsipas who beat Australian Alex De Minaur 6-3 6-4.

Serbian Djokovic bagged the first set at the seventh opportunity and he did not look back after breaking for 2-1 in the second with a booming forehand winner.

Fifth seed Dominic Thiem was beaten 6-3 6-2 by Bulgarian Grigor Dimitrov, who will play in his first quarter-final at a Masters event since Canada 2018.

Dimitrov, who had been struggling since reaching the US Open semi-finals, played brilliantly throughout, taking advantage of Thiem's fading condition after the Austrian won the title in Vienna last Sunday.