Nurse told me had I reached hospital 20 mins late, both my windpipes would have burst: Mohmmad Rizwan 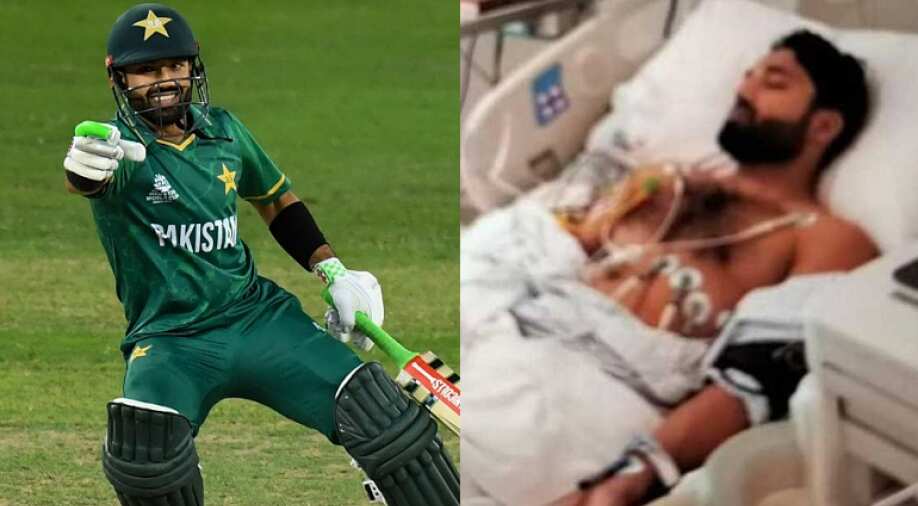 Md. Rizwan was in the ICU for 2 days ahead of Pakistan's semi-final clash. | Photo - AFP/Twitter | Photograph:( Others )

Pakistan batter Mohammad Rizwan revealed chilling details of his battle in the ICU days ahead of his team's semi-final clash against Australia in the T20 World Cup 2021.

Mohammad Rizwan was one of the star performers for Pakistan in the recently-concluded T20 World Cup 2021. The wicket-keeper batter was among the runs for the Men in Green and produced a couple of match-winning knocks to help his team produce a brilliant campaign in the showpiece event which concluded last week. However, it was not an easy tournament for Rizwan, who had spent two days in the Intensive Care Unit (ICU) ahead of Pakistan's semi-final clash against Australia.

Pictures of Rizwan lying on a hospital bed had emerged after his brilliant knock of 67 runs against Australia in the all-important semi-final. It was later revealed that the cricketer was admitted in a hospital even a day prior to the semi-final and that he had spent a couple of days in the ICU. He was hospitalised due to a severe chest infection and was constantly facing trouble breathing.

Rizwan was in a race against time to be fit for the semi-final against Australia and made a miraculous recovery to feature in the all-important encounter. The Pakistan batter recently revealed chilling details of his battle in the ICU and what he was told by one of the nurses regarding his illness. Rizwan said he couldn't breathe when he was admitted to the hospital and that one of the nurses told him both his windpipes would have burst had he been 20 minutes late.

Also Read: 'I was not dropped in 4 years': Indian star says he was down for 2-3 days after T20 World Cup snub

Rizwan was treated by an Indian doctor, who admitted he was astonished by the Pakistan batter's recovery. The doctor had advised Rizwan not to take the field against Australia but the wicket-keeper batter made a full recovery and played the semi-final.

"They used to conduct regular tests but the constant thought in my mind was that I'll soon get fit to play the match. The doctor told me that he wanted me to play the semi-final for Pakistan which gave me a boost. But later, when he told me that 'Rizwan, you are not in a condition to play'… that took me back a little. He told me there are risks involved. Thankfully, things started getting better and I was able to make a quick recovery," Rizwan recalled.

Rizwan turned up in the semi-final against the Aussies and scored 67 off 52 balls to help Pakistan post a fighting total of 176 runs on the board. However, his efforts went in vain as Matthew Wade and Marcus Stoinis' heroics propelled Australia to a five-wicket win over Pakistan to enter the final of the T20 World Cup 2021.

Australia defeated New Zealand by 8 wickets in the final on Sunday to lift their maiden T20 World Cup title in Dubai.