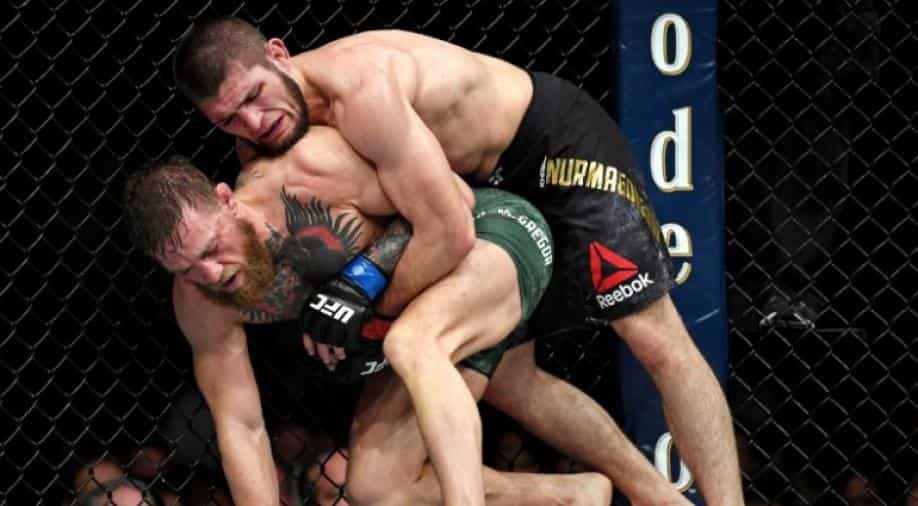 Fights broke out in and around the cage, with a red-shirted fan landing several blows on McGregor before security intervened. Both fighters were escorted from the arena by police and security.

Chaos erupted after Khabib Nurmagomedov retained his UFC lightweight title with a submission victory over Ireland's Conor McGregor on Saturday with members of his support team arrested after an all-in brawl broke out after the bout.

The Russian ended McGregor's attempt to win back the title when he sealed a brutal submission victory with a rear naked choke hold in the fourth round, which then sparked a mass brawl.

Fights broke out in and around the cage, with a red-shirted fan landing several blows on McGregor before security intervened. Both fighters were escorted from the arena by police and security.

The fight had been highlighted by bad blood between both camps, with McGregor pleading guilty in July as part of a deal with prosecutors to resolve charges over an April melee in which he attacked a bus the Russian was travelling on.

The situation boiled over after referee Herb Dean waved off the fight, which prompted Nurmagomedov to jump out of the cage and head straight for McGregor's teammate and corner-man Dillon Danis, prompting a series of violent scuffles.

One man jumped the fence, swinging blows at McGregor before being bundled away by security and there were punches thrown in the crowd as police and security struggled to deal with the angry crowd, most of whom had been backing the Irishman.

White entered the octagon to try to placate Nurmagomedov, who was not presented with the belt, although he was announced as the winner.

The Russian's fans chanted his name and danced in the street outside the T-Mobile Arena, but rather than the fight bringing to the end the feud, it only poured more fuel on the fire.

McGregor, making a comeback to the octagon after nearly two years away, had looked dangerous in the early striking exchanges but as expected, Nurmagomedov quickly took the fight to the ground.

The Russian smothered him with his wrestling skills and prevented him from getting back to his feet for the rest of the first round.

The Irishman was then wobbled by an early right cross from the Russian in the second round and the fight was soon on the floor again, but this time the Russian champion was able to keep the challenger from getting his back to the cage.

McGregor survived until the end of the round, giving a tired smile as the horn went, and in the third period he managed to keep the fight standing, tripping off shots to the head and body as he rediscovered his range.

However, it proved to be too little, too late, and Nurmagomedov was once again on top in the fourth, sapping McGregor's energy with his excruciating pressure before the choke ended the fight 3:03 into the fourth round.

Despite McGregor tapping his arm to indicate his submission, Nurmagomedov seemed to hold on to the winning choke rather than releasing it, encapsulating the bad blood between the pair.

The victory stretched Nurmagomedov's professional record to 27-0 and handed the Irishman his second defeat in the UFC, both to the same choke hold, before the chaos began.