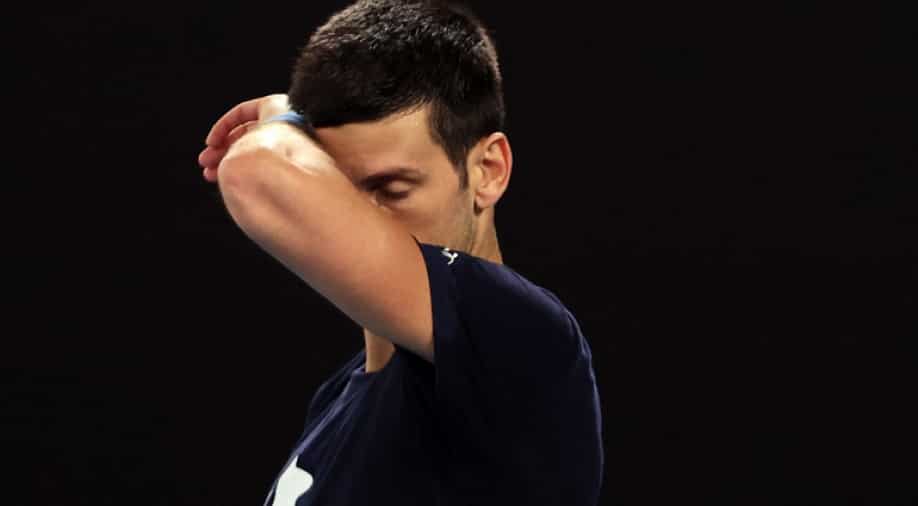 Novak Djokovic's staggering achievements on the court have often been overshadowed by blunders and missteps off it.

Novak Djokovic grew up with NATO bombs raining down on Serbia to become one of the greatest tennis players of all time. But the 34-year-old, who boasts a record-equalling 20 Grand Slams -- the same number as his great rivals Roger Federer and Rafael Nadal -- never fails to divide as well as unite.

His staggering achievements on court have often been overshadowed by blunders and mis-steps off it. The latest and most controversial -- sparked by his refusal to get vaccinated against Covid -- culminated Friday in the Australian government cancelling his visa for a second time, three days before the Australian Open.

Defending champion and world number one Djokovic flew into Melbourne last week claiming a vaccine exemption because of a positive PCR test result on December 16.

The exemption sparked fury among Australians -- who have endured Covid-19 lockdowns and restrictions for two years -- and his visa was cancelled, landing him in an immigration centre, before a court overturned that.

But the government has now torn up Djokovic's visa for a second time and he faces deportation.
- Brooding, divisive -

Even before this, Djokovic was seemingly doomed never to be held in the same esteem as Federer or Nadal, the undisputed people's champions.

There are those who see something too calculating in the Djokovic make-up -- an intense, brooding presence prone to affectation, a little too 'new age'.

A fiery temperament -- a characteristic often absent from the DNA of Federer and Nadal -- bubbles over too often.
His infamous default from the US Open in 2020 for petulantly swiping at a ball which speared into the throat of a female line judge was a snapshot of the demons that occasionally lurk inside.

Djokovic, who left Belgrade when he was 12 to train in Munich and escape NATO's bombardment of his home city, often feels he can't stand up for falling down.

His decision to organise a series of exhibition events in the Balkans in the middle of the pandemic may have been with the best of intentions but a series of positive Covid-19 tests, including for him and his wife Jelena, highlighted the recklessness of the plan.

He then publicly expressed his doubts over the Covid vaccination programme, a stance which saw him dubbed 'Novax'. One of his most vocal detractors, Australian player Nick Kyrgios, once accused Djokovic of a desperate need to be liked, describing the Serb's post-victory on-court "cup of love" gesture as "cringeworthy".

However, the career achievements and resolve of a player who was the first to smash through the $150 million prize-money barrier cannot be doubted. Four years ago, Djokovic's career was in the doldrums.

Unable to shake off the lingering effects of elbow surgery, he suffered a shock early exit at the French Open, once the site of many setbacks. With his ranking outside the top 20 for the first time in 12 years, Djokovic even threatened to skip Wimbledon.

He changed his mind, and suddenly rejuvenated, swept to a fourth title at the All England Club and successfully defended it a year later, saving two championship points in an epic final against Federer.

Also Read: Novak Djokovic entitled not to get jabbed, Australia entitled to throw him out: Shane Warne

Djokovic has 20 Grand Slam titles in his career haul of 86.

He has occupied the world number one spot for a record number of weeks, bettering the record of Pete Sampras.
In the race for greatness, he has winning records over both Nadal and Federer, 30-28 and 27-23 respectively.

Djokovic captured the first of his majors at the Australian Open in 2008, but it was three years before he added his second.

He dropped gluten from his diet, his lithe physique allowing him to chase down lost causes.

Only a semi-final defeat at the French Open prevented him from already capturing a calendar Grand Slam.

Despite that, he finished 2011 with a 70-6 win-loss record, a haul of 10 tournament victories and year-end number one for the first time.

Back-to-back Australian Opens followed in 2012 and 2013, although the French Open remained frustratingly out of reach with three heart-breaking losses until his 2016 breakthrough.

The year before, he won 11 titles and compiled a win-loss record of 82-6. In total, he has nine Australian Opens, six Wimbledons, three US Open titles and two French Opens.

His win over Nadal in an epic semi-final at last year's French Open was only the Spaniard's third loss in 108 matches at the event.

Djokovic has been responsible for two of them.

He added the 2021 Wimbledon title to his haul but missed out on becoming the first man in more than half a century to complete a calendar Grand Slam with defeat in the final of the US Open.