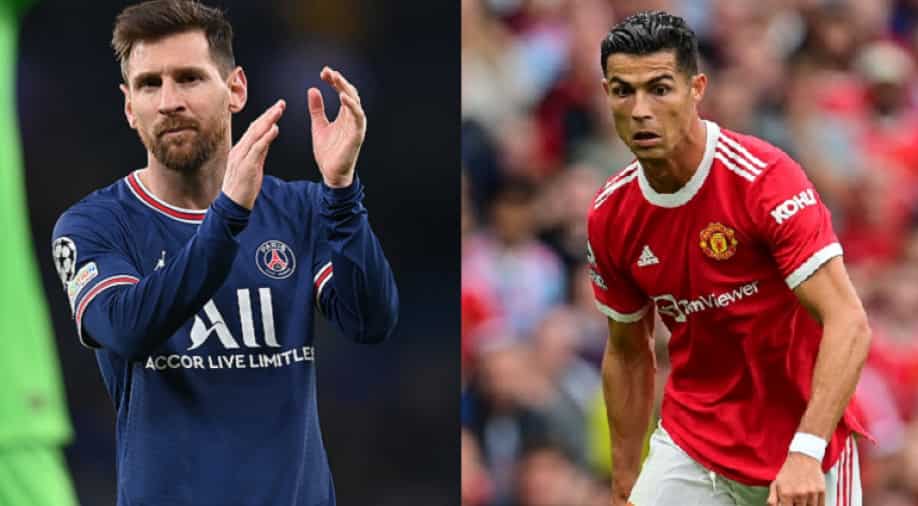 Messi's PSG would have faced Ronaldo's Manchester United in UCL Round of 16 as per the earlier draw. Photograph:( AFP )

UEFA has declared the earlier Champions League Round of 16 draw as void and it will be redone on Monday (December 13) at 7:30 PM IST.

Lionel Messi would have been up against Cristiano Ronaldo as Manchester United were drawn against Paris Saint-Germain (PSG) in the UEFA Champions League 2021-22 Round of 16 draw which was conducted on Monday (December 13). However, in a latest twist, UEFA has declared the draw void after a technical error and has annunced that it will be redone at 7:30 PM IST on Monday (December 13).

Manchester United topped Group E with three wins and two draws from six games while PSG had finished second behind Manchester City in the Group A of the Champions League this season. The Champions League Round of 16 draw was conducted at the UEFA headquarter in Switzerland's Nyon on Monday (December 13). Manchester United's draw against PSG was the biggest talking point as the clash would have witnessed Messi and Ronaldo go up against each other in what could have been a blockbuster affair.

Messi and Ronaldo last faced each other when the Portuguese icon was still at his former club Juventus while Messi was playing at his boyhood club Barcelona in 2020. Ronaldo had scored twice to hand Juventus a 3-0 win in the first leg of the group stage clash at the Camp Nou before missing the returning fixture where Barcelona won 2-0.

They both changed clubs ahead of the ongoing season this year and have been plying their trade in different leagues once again. While Messi left Barcelona to join PSG, Ronaldo made a fairytale come back to join his former club Manchester United. However, the fans now might have to wait to see the arch-rivals face each other once again as the draw will be conducted once again on Monday evening.

"Following a technical problem with the software of an external service provider that instructs the officials as to which teams are eligible to play each other, a material error occurred in the draw for the UEFA Champions League Round of 16," UEFA said in a tweet.

"As a result of this, the draw has been declared void and will be entirely redone at 1500 CET," it added.

Defending champions Chelsea had managed to get a relatively easier draw in the Round of 16 as they were paired against French side Lille, who have struggled badly so far this season and are currently placed eleventh in the Ligue 1 points table. Manchester City were drawn against La Liga side Villarreal, who won the Europa League last season.

Bundesliga leaders Bayern Munich were drawn against Atletico Madrid while Liverpool would have been up against Red Bull Salzburg, as per the last draw which is now void. All sixteen teams who have qualified for the next round from the group stages will now find out their respective opponents on Monday.