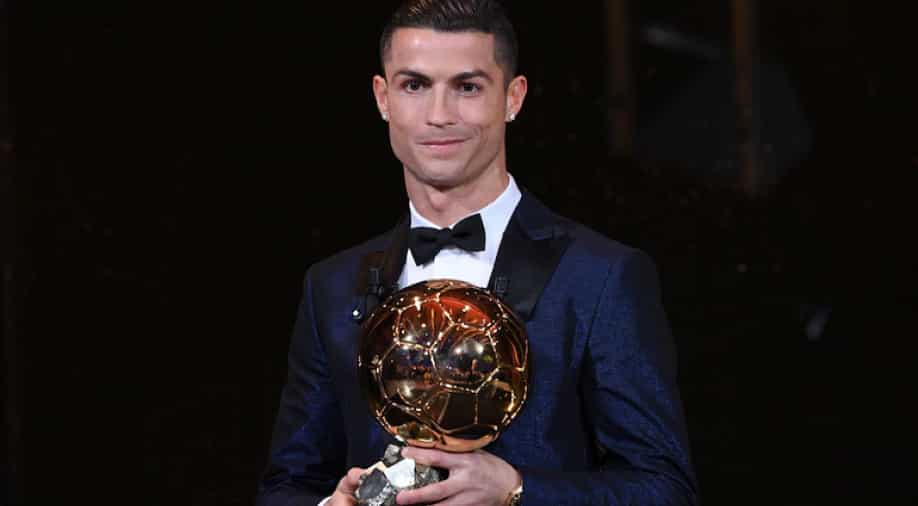 Cristiano Ronaldo has hit out at the Ballon d'Or chief. Photograph:( AFP )

Cristiano Ronaldo has hit out at Ballon d'Or chief Pascal Ferre for his claim that the Manchester United superstar told him he wants to retire with more Ballon d'Ors than Lionel Messi.

Manchester United superstar Cristiano Ronaldo has slammed France Football editor-in-chief Pascal Ferre for claiming that the Portuguese legend told him he wants to retire with more Ballon d'Or awards than his arch-rival Lionel Messi. France Football gives out the Ballon d'Or award every year to honour the best player of the year. The award is considered the most prestigious individual honour in world football.

In a lengthy post on Instagram, Ronaldo blasted Ferre and branded him a 'liar' while also accusing him of using his name to promote himself and his publication. Ronaldo's statement came after Messi was awarded the Ballon d'Or 2021 in Paris on Tuesday. The Argentine icon claimed the honour for a record-extending seventh time.

“Ronaldo has only one ambition, and that is to retire with more Ballons d’Or than Messi…. and I know that because he has told me,” Ferre had been quoted as saying earlier.

Responding to his claims, Ronaldo lashed out at Ferre and said it was unacceptable that a person responsible for giving out a major honour like the Ballon d'Or is making such baseless allegations again. He also slammed the Ballon d'Or chief for justifying his absence at the Ballon d'Or award ceremony on Tuesday with a lie.

“Today’s outcome explains why Pascal Ferré’s statements last week. when he stated that I confided in him that my only ambition was to finish my career with more Golden Balls than Lionel Messi. Pascal Ferré lied, he used my name to promote himself and to promote the publication he works for," Ronaldo wrote in a post on Instagram.

“It is unacceptable that the person responsible for awarding such a prestigious prize could lie in this way, in absolute disrespect for someone who has always respected France Football and the Ballon d’Or. And he lied again today, justifying my absence from the Gala with an alleged quarantine that has no reason to exist. I always want to congratulate those who win, within the sportsmanship and fair-play that have guided my career since the beginning, and I do it because I’m never against anyone.

Ronaldo, who is regarded as one of the best footballers of all time, has five Ballon d'Or awards to his name. He has proven himself in top leagues around the globe and has been a force to reckon with for Portugal at the international level. The goal machine is currently at Manchester United, where he first came to the limelight after his exploits in the Premier League.

A serial winner, Ronaldo is one of the most successful footballers of all time and has won as many as five Champions League titles along with three Premier League and two La Liga trophies in his illustrious career. He has also won Serie A twice with Juventus. Ronaldo said the biggest ambition of his career is to set a good example for professional footballers around the world and to leave his name in golden letters in the history of the game.

“I will end by saying that my focus is already on Manchester United’s next game and on everything that, together with my teammates and our fans, we can still achieve this season. The rest? The rest is just the rest…”