Never let people limit your achievement because you are a woman: Mary Kom to WION 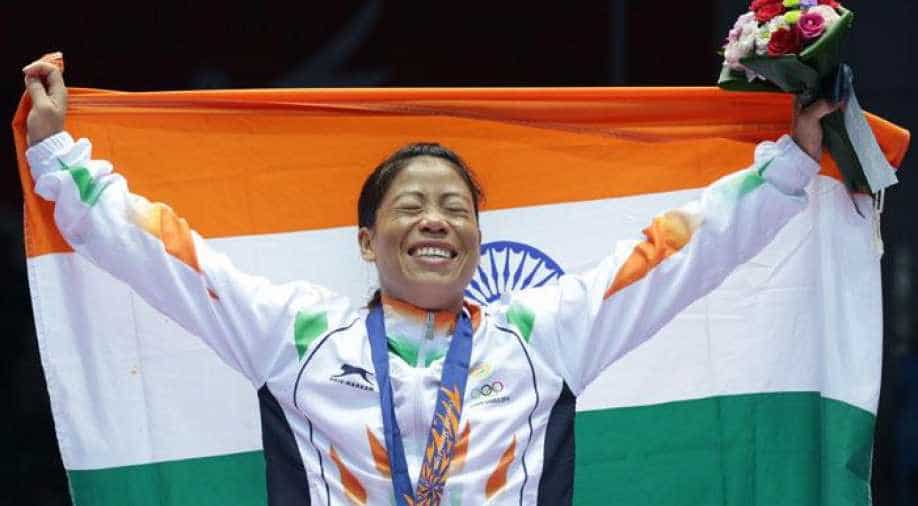 Mary Kom is a super woman. She is a boxer and attaches utmost importance to her game. She has bought glory and fame to India. She has achieved her feat with grit, determination and practice.

She is also a daughter, wife and mother. She takes her role at home as seriously as she takes her game. Not to forget she is a Member of Parliament too and diligently delivers what is expected of her.

It is fascinating how she plays her multiple roles with such panache. Always calm and composed, her smile spells strength for those who know her.

She is a brilliant boxer, but first she is gem of a person. Kind, considerate, compassionate.

On Women's Day, WION caught up with the Olympic medalist for an exclusive chat.

WION: What does it mean for you to be a fighter?

Mary Kom: Since childhood I love sport. Every child loves to play. It's a huge thing for me to take up sports, specially boxing. My career starts from boxing. So, it does mean a lot for me. I have achieved everything through boxing.

WION: Who has been your biggest inspiration in your journey?

Mary Kom: My biggest inspiration is the legend Muhammed Ali. He inspired me to take up boxing.

WION: If you could have one dream fight with anyone who would it be?

Mary Kom: (laughs) Very difficult to decide who it will be - it can be woman or man - anybody who wants to fight with me just for fun will be welcomed.

WION: How do you balance your personal and professional life being a woman?

Mary Kom: Being a woman, I have to take up many roles – from being a mother to look after the family, being a boxer to maintain myself, another responsibility being a Member of Parliament - there are so many things in my personal life. There are different things to face in my life. The most is to maintain the performance because this is very important for me being a sportsperson. I have alredy achieved this level. And to maintain this high level is very very important.

WION: What do you want to be remembered for at the end of your career?

Mary Kom: It's not end yet actually – I'm still continuing – but the biggest will be Olympics - if I win gold medal in Olympics. I want this to be remembered at the end.

WION: As a woman who has taken up so many roles, which of your roles is the most challenging - that of a boxer, a homemaker, a wife and mother or as a lawmaker in Rajya Sabha?

WION: Since we are talking to an achiever on the occasion of Women's Day, do you feel we need more women lawmakers in India? Also, do you support implementation  of 33 per cent reservation for women?

Mary Kom: If you ask me, yes we need to have more women lawmakers. Women are strong and must pursue their dreams at all cost. You may fail first, second or even the third time but if you show perseverance you will succeed one day. I have seen failure too. When I started boxing, nobody believed in me because I am a woman. They said boxing is a man's game. But see, how things have changed. Today many many more women are taking up this sport. I have taken criticism in my stride and fought to prove people wrong.

WION: You are eyeing the 2020 Olympics in Tokyo. Where do you get the resolve from? What keeps you going?

Mary Kom: The resolve comes from sheer willpower. It comes from within. When we achieve people appreciate but when we don't a lot of flak comes our way. The idea is to remain positive. I always tell myself that if somebody can, I can too? I keep telling myself that I can do it. My biggest support comes from my husband. After my marriage things became complicated. But with my husband's support and my willpower I kept fighting and never once gave up. This is the only reason I could continue fighting with boxers younger than me and achieving my goals. It is important that my passion for the game stays alive in me. Whether you succeed or not you have to keep going. You cannot let the passion die. One day you will feel proud of what you have done and that will bring you the enormous joy.

WION: Can you share with us your future plans?

Mary Kom: There are so many things I want to do. I want to contribute to the youth, especially those in my profession I currently run my boxing academy. My academy looks after the needs of boxers who are not privileged enough to afford training. I have chosen some of the girls and post retirement I want to dedicate my time to bring up the next Mary Kom. I want to do more for my country.

She has a special message for women on this International Women's Day. Mary wants every woman to believe that nothing is impossible if one has determination. "Every woman is strong" she stresses. She pleads with women to go ahead and chase their dreams. "Nobody can stop you. At the end people will recognise you for what you have done. I have also done it, you can do it too," she said in her parting note.