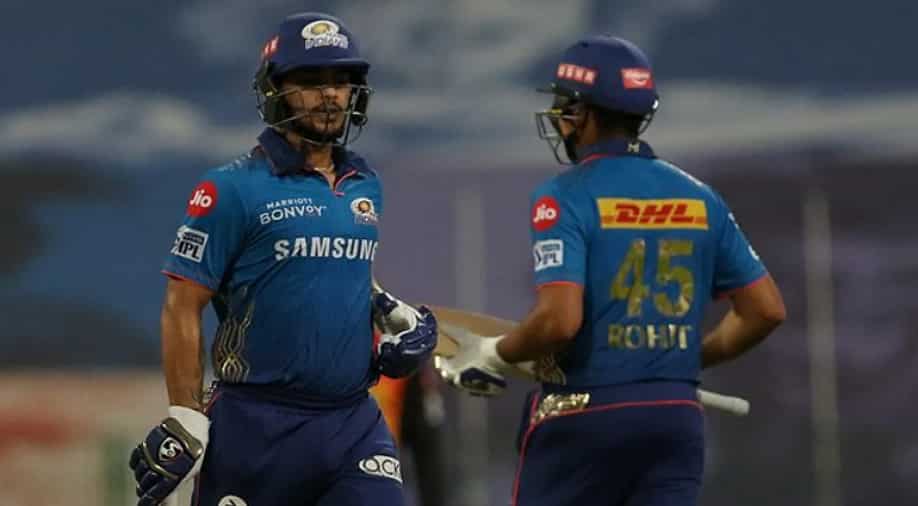 Mumbai Indians rode on half-centuries from Ishan Kishan and Suryakuar Yadav to post a staggering total of 235/9 on the board in 20 overs.

Mumbai Indians rode on half-centuries from star batsmen Ishan Kishan and Suryakumar Yadav to post a hefty total of 235 runs on the board in their final league game of the Indian Premier League (IPL) 2021 against Sunrisers Hyderabad (SRH) at the Sheikh Zayed Stadium in Abu Dhabi on Friday (October 08).

Mumbai Indians headed into the game with odds stacked against them in the race for the final spot in IPL 2021 playoffs as they needed a massive 171-run win against SRH to qualify for the top four. However, their batsmen responded in a stellar fashion as they went after the SRH bowlers from the word go.

Young wicket-keeper batsman Kishan got MI off to a flyer with a sublime knock of 84 runs off just 32 balls laced with 11 fours and four sixes. Suryakumar Yadav then notched up a quickfire 40-ball 82 to power the team's total to 235/9 in 20 overs.

Here's a look at the top five highest totals in the history of IPL:

Also Read: David Warner hints at SRH exit in emotional post: My family and I are going to miss you

Mumbai Indians are in a tricky position in their final league game against SRH as they need to win by a margin of 171 runs to make it to the playoffs. MI had headed into the clash placed sixth on the points table with 12 points from 13 matches and an inferior net run rate of -0.048.

With 236 runs on the board, MI need to restrict SRH on 65 runs runs or less than that to qualify for the playoffs which is a near impossible task.