Might have to get umpire a beer: RCB pacer Josh Hazlewood on Marcus Stoinis-wide ball incident vs LSG 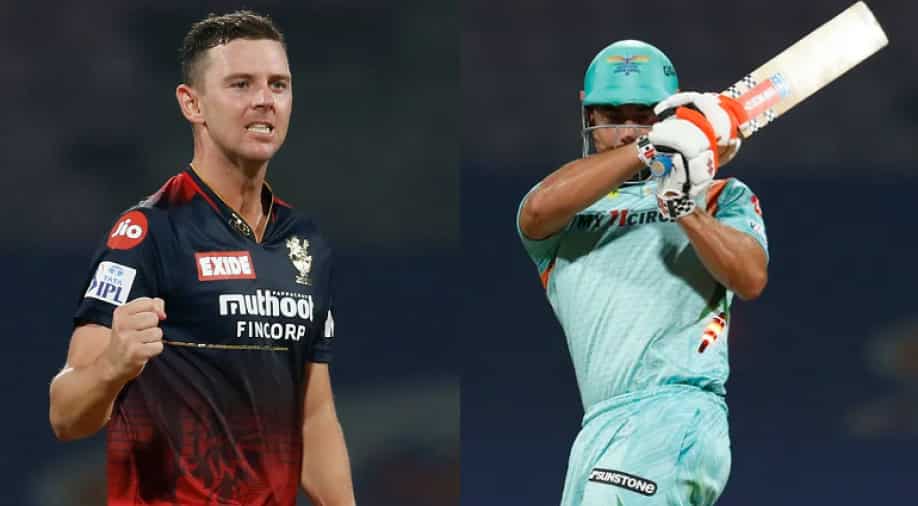 Josh Hazlewood admitted he got lucky with a wide call against LSG. | Photo - IPL | Photograph:( Others )

Royal Challengers Bangalore (RCB) pacer Josh Hazlewood admitted he got lucky with a wide call going his way during his side's clash against Lucknow Super Giants in IPL 2022 on Tuesday.

Royal Challengers Bangalore (RCB) pacer Josh Hazlewood said he might have to get the on-field umpire Chris Gaffaney a drink after admitting he got lucky with a wide decision going his way during his side's clash against Lucknow Super Giants in the ongoing Indian Premier League (IPL) 2022 on Tuesday. Hazlewood was once again brilliant with the ball for RCB and produced a match-winning performance for his team against LSG.

The Australian fast bowler picked up a four-wicket haul as he helped RCB restrict Lucknow Super Giants on 163/8 in 20 overs to secure a comfortable 18-run win for the team. While he bowled an exceptional spell, Hazlewood got away with a clear wide ball against Marcus Stoinis at a crucial juncture in the game and the incident led to a controversy.

The incident happened in the 19th over of LSG's 182-run chase when all-rounder Marcus Stoinis was facing Hazlewood. The Aussie pacer started with a wide delivery to keep the ball away from Stoinis after the LSG all-rounder had shuffled across the stumps. While the ball was clearly outside the tramline, it was still not adjudged a wide by on-field umpire Gaffaney.

Also Read: Virat Kohli is overcooked, if anyone needs a break it's him: Ravi Shastri on RCB star's woeful form

Gaffaney didn't call it a wide as he felt Stoinis had moved across the stumps a little too much. Stoinis had a smile on his face after the umpire's controversial call but was clearly not happy after he was dismissed on the next delivery. Stoinis was visibly frustrated after the dismissal on the very next ball as fans felt the wide call had a role to play in his departure.

When asked about the wide call going his way during the crucial juncture in the game, Hazlewood admitted he got lucky and said he might have to offer umpire Gaffaney a drink. He also revealed he had no words with the umpire and was looking to go back to hi run up quickly after bowling the delivery.

“I tried to turn around and get back to my mark as quick as I could. I got pretty lucky on that one so I might have to get him a beer after that,” Hazlewood said speaking at the post-match interview.

Hazlewood was one of the heroes of RCB's win but his performance was a bit overshadowed by skipper Du Plessis, who played an amazing knock of 64-ball 96 to help RCB post a strong total of 181 runs, batting first at the DY Patil Stadium in Mumbai. Du Plessis paced his innings brilliantly and kept his composure despite wickets tumbling regularly on one end.