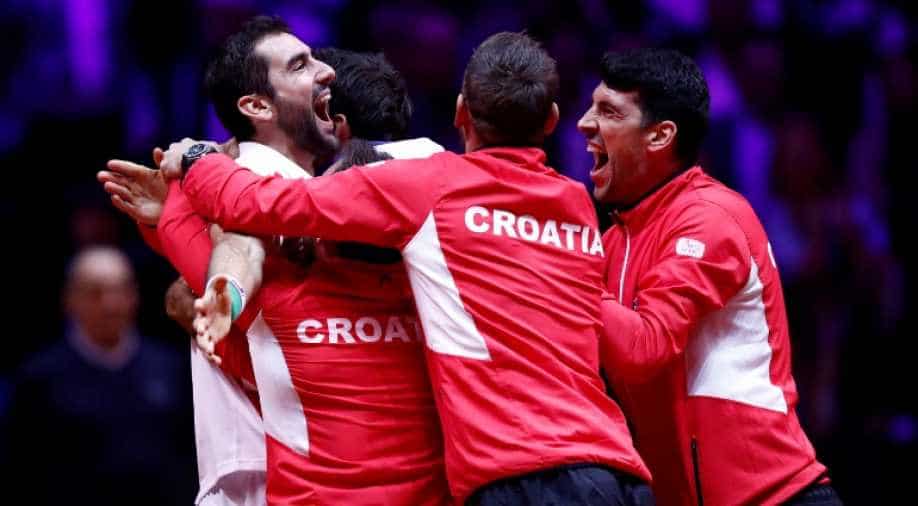 Pouille, 24, did not have a single break point and despite pushing Cilic hard in the first set, he lost the last four points of the tiebreak and never threatened a comeback.

Marin Cilic clinched Croatia's second Davis Cup title as he beat France's Lucas Pouille 7-6(3), 6-3, 6-3 to give his side a decisive 3-1 lead in the final at Lille's Stade Pierre Mauroy on Sunday.

The powerful world number seven was relentless as he snuffed out any hope of a famous French fightback - giving Pouille little chance of sending the showpiece into a fifth rubber.

Pouille, 24, did not have a single break point and despite pushing Cilic hard in the first set, he lost the last four points of the tiebreak and never threatened a comeback.

Cilic wasted four set points when Pouille battled back from 0-40 down at 2-5 in the second set but with his own serve rock-solid, he calmly moved into a two-set lead.

The mainly French 22,000 crowd kept roaring their support for Pouille, but it was the Croatia contingent, decked out in their distinctive red and white, who would soon be celebrating.

Cilic broke for a 3-2 lead in the third set and then closed in for the kill when Pouille served at 3-5.

The Frenchman saved two match points from 0-40 but Cilic would not be denied and finished it off with a lob.

Immediately the 30-year-old former US Open champion was swamped by a swarm of his teammates as Croatia could begin the party after emulating their triumph of 2005.

Croatia's sports-mad President Kolinda Grabar-Kitarovic was among the fans at courtside to savour a landmark title which offered some consolation after France beat Croatia in this year's soccer World Cup final.

"It's not every day that you become a world champion," Cilic, draped in a Croatian flag, said on court.

"For us it's a dream come true, for this nation. You can see the fans are so passionate and they are here enjoying themselves. In Croatia it's going to be incredible too."

Croatia will enter the history books as winners of the last final played in the traditional format before the 118-year-old team competition gets a major revamp.

Next November a new format will see 18 teams assemble in Madrid for a World Cup-style event to decide the champions.

Hosts and defending champions France had begun the day still holding out hope of becoming the first team to overturn a 2-0 deficit in the final since Australia beat the US in 1939.

But there was to be no fairytale ending for French captain Yannick Noah in his last match in charge of Les Bleus.