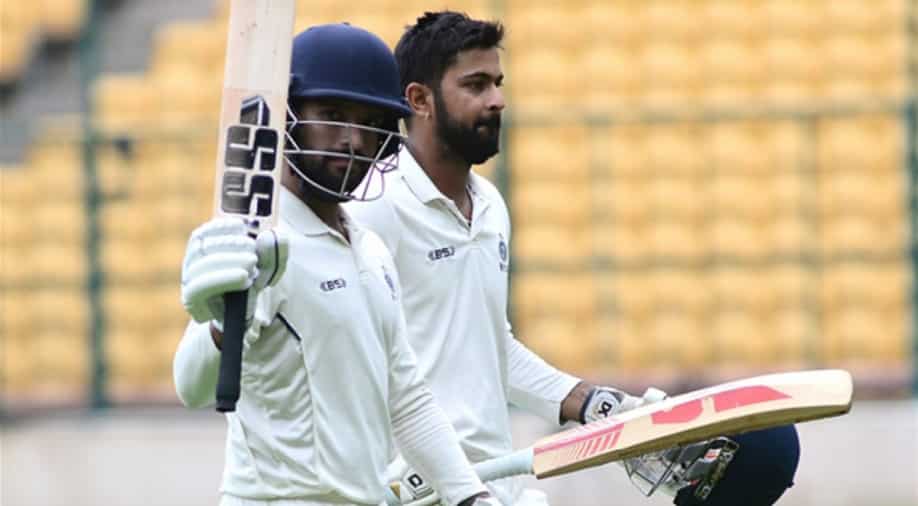 Rajat Patidar was one of the stars of Madhya Pradesh's title-winning campaign. Photograph:( IANS )

Madhya Pradesh defeated Mumbai by six wickets in the final of Ranji Trophy 2022 on Sunday (June 26) to clinch their maiden title.

Madhya Pradesh scripted history as they defeated Mumbai in the final of the Ranji Trophy 2022 to clinch their maiden title at the M.Chinnaswamy Stadium in Bengaluru on Sunday (June 26). Madhya Pradesh were asked to chase a paltry 108 runs inside two sessions on the final fifth day of the summit clash and they managed to overhaul the target with ease to take down Mumbai and win their first-ever Ranji Trophy title. After crucial knocks from opener Himanshu Mantri (37) and Shubham Sharma (30), Rajat Patidar remained unbeaten on 30 off 37 balls to take Madhya Pardesh home in the crucial run-chase.

Madhya Pradesh enjoyed a dream run in the tournament under head coach Chandrakant Pandit, who has now won the Ranji Trophy with the likes of Mumbai, Vidarbha and Madhya Pradesh. The Aditya Shrivastava-led side was up against a dominant Mumbai team in the final but completely outplayed the domestic giants to win the elusive title.

Sarfaraz Khan continued his dream run with the bat for Mumbai in their first innings as he slammed a brilliant 134 -run-knock to help the Prithvi Shaw-led side post 374 runs on the board. However, Madhya Pradesh responded in style with as many as three batters notching up centuries apiece.

Opener Yash Dube, Shubham Sharma and the in-form Rajat Patidar slammed a ton each to propel Madhya Pradesh to a hefty total of 536 runs and gain a healthy lead in their first innings. Sarfaraz was once again the star for Mumbai in their second innings with a quickfire 45 off 48 balls while captain Shaw and Suved Parkar played crucial knocks of 44 and 51 runs respectively to help their team reach 269 runs.

In the end, Madhya Pradesh stood just 108 runs away from becoming the champions of India's premier domestic cricket competition and their batters didn't disappoint as they chased down the target on Day 5 with more than a session to spare.

Patidar, who had a brilliant campaign for Royal Challengers Bangalore in IPL 2022 after joining the franchise as an injury replacement, continued his purple patch in the Ranji Trophy knockouts to finish as the highest run-getter for Madhya Pradesh with 658 runs from six matches. Kumar Kartikeya finished as the highest wicket-taker for the champions with 27 scalps from five games.

Sarfaraz, who enjoyed a dream run in the Ranji Trophy last season, continued his heroics once again this year as he piled on runs at an incredible consistency to once again finsih as the highest run-getter of the season. The Mumbai batter scored a whopping 982 runs in just 6 matches, including four centuries to stamp his authority in the domestic tournament.

It was an emotional moment for MP head coach Pandit after winning the title with his formet team. Pandit had missed out on leading MP to their maiden Ranji Trophy title as captain in the 1998-99 season 23 years back. Pandit said it was a blessing to come back an win the trophy as a coach at the same ground where he had missed out on the title as a captain.

"It is a great memory that I had left 23 years back (he lost the Ranji Trophy final as Madhya Pradesh captain in 1998-99) and it is a blessing that I come back here, and winning this trophy was fabulous. It is emotional because I missed out as captain on the same ground," said Pandit.