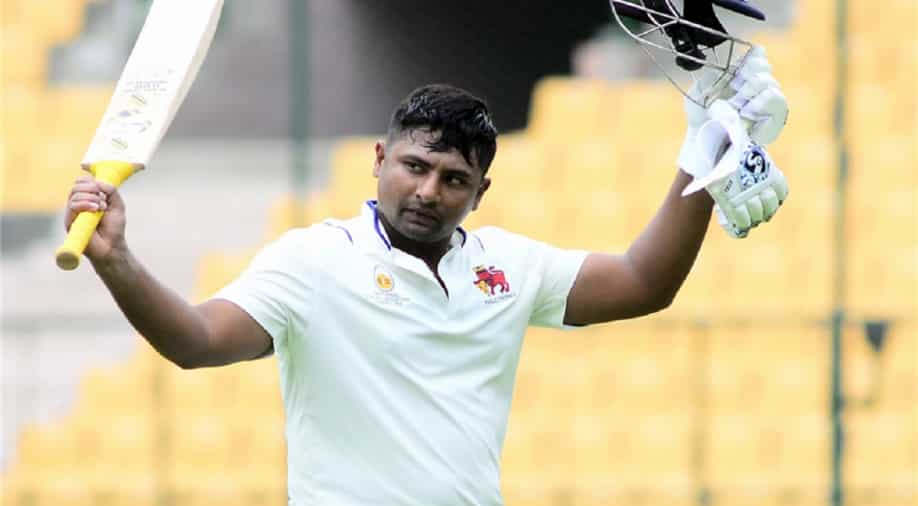 Sarfaraz Khan has been incredibly consistent in Ranji Trophy over the last two seasons. Photograph:( IANS )

Former India cricketer Sanjay Manjrekar has backed Sarfaraz Khan to secure a spot in India's Test squad after his heroics for Mumbai in the Ranji Trophy 2021-22.

Sarfaraz Khan has been piling on runs at an incredible consistency in the Ranji Trophy over the last couple of seasons. He has been one of the best batters in the tournament in the last two seasons and has been knocking on the selectors' door for a maiden Test call-up. The Mumbai batter slammed a brilliant century in the ongoing Ranji Trophy 2021-22 final against Mumbai and followed it up with a quickfire 45 in the second innings.

He is the highest run-getter in the Ranji Trophy this season with a staggering 982 runs in six matches at an average of over 122 and a strike rate of 69.54, including four centuries and two fifties for Mumbai. He has once again stirred a selection debate as fat as India's Test squad is concerned with his stunning performances.

With Ajinkya Rahane out of the Test squad and Shreyas Iyer yet to cement his spot in the middle-order in the longest format, former India cricketer Sanjay Manjrekar believes India can try Sarfaraz in the middle-order in their Test team. The cricketer-turned-commentator pointed out how Sarfaraz's batting style doesn't inspire much confidence in him being Test quality but his records over the last two seasons speak for themselves.

"Because of the way he bats, you sort of wonder whether he's a Test potential kind of a player. But the amount of runs he's got in the last two seasons - and he doesn't get 103, 104, he gets big scores and it comes very quickly as well at a great strike rate," Manjrekar said during a press conference organised by Sony Sports Network.

"So even if you don't have a spot readily available - you want to try out the incumbents first, because Shreyas Iyer has grabbed the opportunity as a Test batter by getting runs - there is absolutely no harm in getting Sarfaraz Khan in closer to the Indian Test squad," he added.

Manjrekar further went on to back Sarfaraz to at least get a spot in the Indian Test squad if not make the cut into the playing XI. He also urged the BCCI to deservingly recognise the top performers in Ranji Trophy to elevate the importance of India's premier domestic competition.

"Because when someone performs this heavily at the Ranji Trophy level, it's also to a message that we care about Ranji Trophy. We care about our First-Class cricket. And when you recognise performances of your Ranji Trophy cricket and reward the players with recognition at the Test level, then you also elevate the importance of Ranji Trophy level. He is very deserving of coming close to a Test squad selection even if not in the playing XI," Manjrekar said.