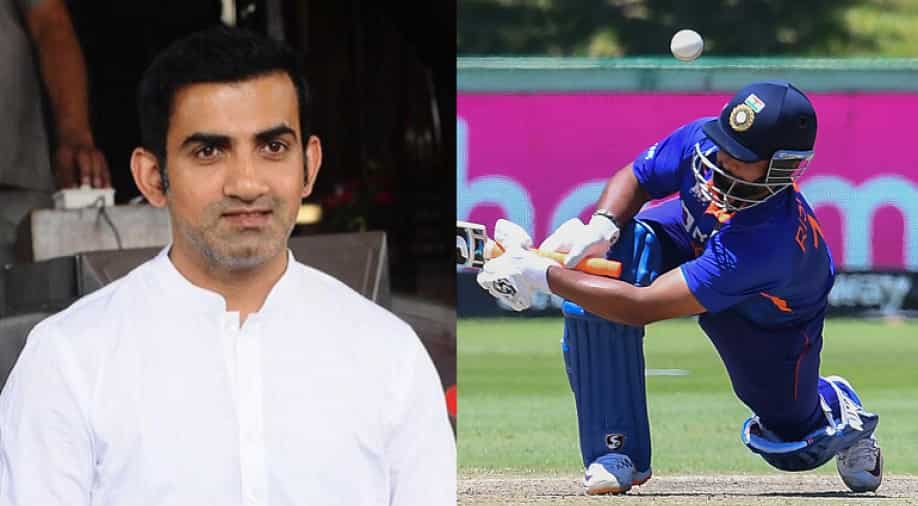 Former India opener Gautam Gambhir has given his take on Rishabh Pant's aggressive style of batting amid the left-hander facing criticism for throwing his wicket away in the third ODI against South Africa.

Former India opener Gautam Gambhir believes the Indian team management will have to back Rishabh Pant patiently in order to groom him into a mature finisher for the team. Pant is facing intense criticism from all corners after throwing his wicket away in the third and final ODI against South Africa in Cape Town on Sunday.

Pant came out to bat at number four with Inda 118/3 in the 288-run chase after losing the wicket of Shikhar Dhawan. While he was expected to build a partnership with Virat Kohli, who was batting on the other end, Pant was dismissed by Andile Phehlukwayo as he went for a big shot.

He was caught in the deep by Sisanda Magala as he had to walk back without managing to open his account. Pant, who has often been criticised for his poor shot selection, has since been facing criticism as India lost the game by just 4 runs after falling short in the run-chase.

Former India opener Gambhir shared his views on Pant's swashbuckling approach and said the left-hander will play many match-winning innings for India in the future but will also play rash shots like the one he did on Sunday as it is his natural style of batting. Gambhir said Pant's batting is not like someone like Virat Kohli and he will continue playing in the same attacking manner.

“You have to accept him the way he is. He will play match-winning innings but also play rash shots like today. If the management is patient to back a player like this, then we can see him getting more opportunities," Gambhir said on Star Sports.

"You live by the sword, you die by the sword. Pant will continue playing in the manner that he's currently playing. He's not someone like Virat Kohli, who will slowly build his innings. Yes, the team management can groom Pant to do that but it won't happen overnight... it will take time," he added.

Pant's dismissal cost India big time as the middle-order failed to deliver once again. Suryakumar Yadav (39) and Shreyas Iyer (26) played two crucial knocks but failed to stay in the middle for long which led to the tail-enders getting exposed against the South African pacers.

Nonetheless, Deepak Chahar produced a sensational cameo of 34-ball 54 to keep India in the game till the end. He was dismissed in the 48th over with India needing only ten runs to win but South African bowlers managed to keep their nerves and pulled off a close win to clinch the series 3-0.