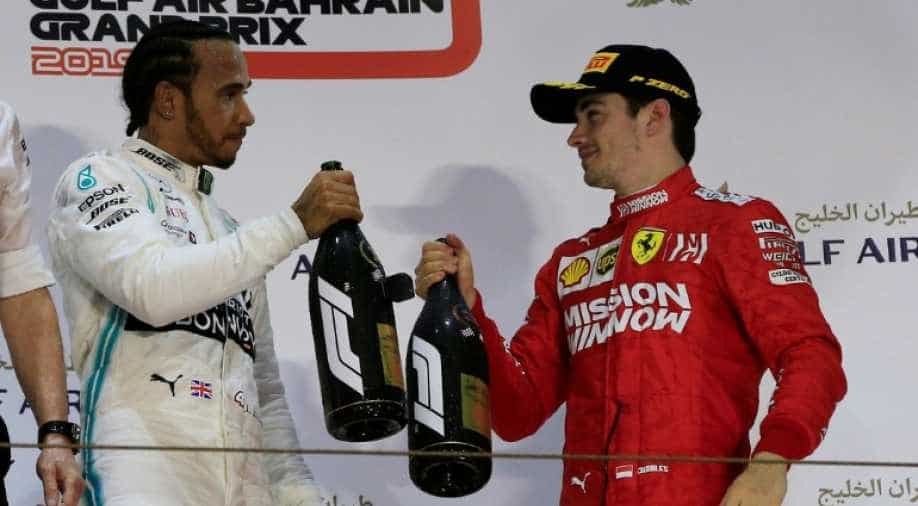 In a dramatic twist, race leader Leclerc's engine started losing power with under 10 laps left and he faced a disappointment for a maiden F1 win.

Formula One world champion Lewis Hamilton praised Ferrari's young driver Charles Leclerc, who made his first F1 podium finish in the Bahrain Grand Prix. The Briton said that the young racing sensation deserved to win and hoped for great battles in future.

Hamilton said, "He thoroughly deserved the win today. He did an exceptional job all weekend, so really proud of him and I know it's a really tough experience to go through what he's going through, but he will learn. He's already so strong this weekend. He'll bounce back. He'll grow."

"This will be another layer to his young greatness already and I'm looking forward to many battles with him hopefully in the future," Hamilton added.

Leclerc emerged as a star when he took his first Formula One pole position with a stunning display in qualifying for the Bahrain GP on Saturday.

But in a dramatic twist, race leader Leclerc's engine started losing power with under 10 laps left and he faced a disappointment for a maiden F1 win.

Leclerc, who joined Ferrari ahead of this season, faced the undesired misfortune when a single cylinder of his car failed.

With the win, Ferrari's Leclerc would have become the third-youngest winner of an F1 race.

Although, he became the 50th driver to lead a race for Ferrari. He also became the sixth youngest driver in F1 history to stand on an F1 podium.

Instead, he was dropped to third as Mercedes pair Lewis Hamilton and Valtteri Bottas finished first and second respectively.

"We have been pretty lucky in an unlucky situation"

Some #MondayMotivation from a driver wise beyond his years - even if @charles_leclerc wasn't sure where he was going, he knew what to say 👏#F1 pic.twitter.com/dDn6D9qiyT

Leclerc is the second youngest pole sitter of all time. Vettel did it at 21 years and 73 days with Toro Rosso at Monza in 2008.

He will also be the first driver from Monaco to start at the front since the world championship started in 1950.