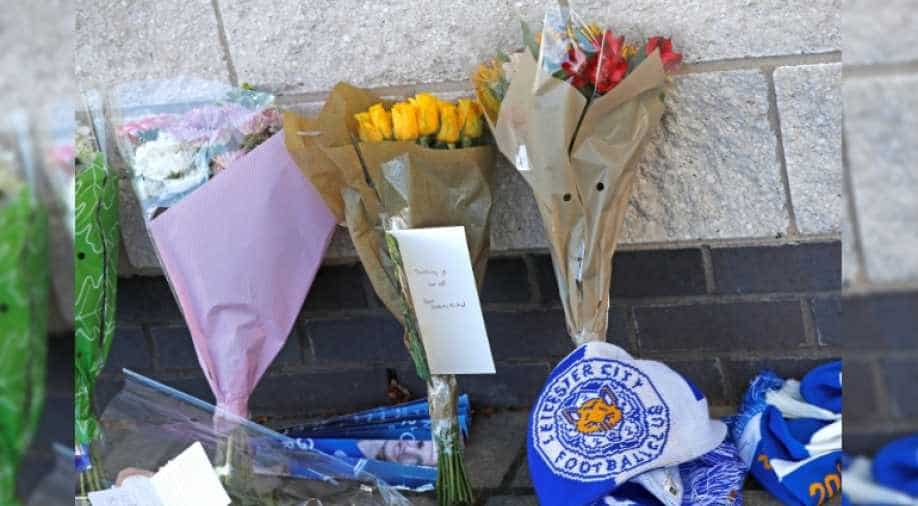 Messages and flowers can be seen placed outside Leicester City football stadium after the helicopter of the club owner Thai businessman Vichai Srivaddhanaprabha crashed. Photograph:( Reuters )

The tragic ending stunned Thais who had followed Vichai's fairytale-like success and the days since have been filled with heartfelt comments from admirers, footballers, friends and relatives.

The elaborate funeral of Leicester City's Thai owner and duty-free mogul Vichai Srivaddhanaprabha began at a Buddhist temple in Bangkok Saturday evening, as members of Thailand's business and political elite came in black mourning garb to pay tribute to the well-connected billionaire.

The number two in Thailand's junta Prawit Wongsuwan and CP group's Dhanin Chearavanont, the richest man in the country, were seen arriving at the week-long ceremony, which begins with three days of royally-sponsored bathing rites.

Prominent figures in Thailand's music and sporting scene were also in attendance to honour the odds-defying life of Vichai, 60, who along with four others died in a helicopter accident moments after they departed the football club's pitch a week ago.

The tragic ending stunned Thais who had followed Vichai's fairytale-like success and the days since have been filled with heartfelt comments from admirers, footballers, friends and relatives.

"He's now the leader of Thai football and leader of world football because he changed a lot of things when he took the chairmanship of Leicester City," Thai football legend Kiatisuk "Zico" Senamuang told AFP outside the ceremony, his tone sombre.

"Because Leicester can show they could be champion of the Premier League, that's why anything in Thailand can happen in the future."

Vichai rose from having a single store in Bangkok to owning the duty-free King Power empire, whose shops are ubiquitous in Thailand's tourist-heavy airports.

Using the profits from his monopoly, he bought Leicester City and helped turn them from an unremarkable English club into the surprise winners of the Premier League title in 2016.

Despite his business smarts Vichai owed his ascent to canny navigation of Thailand's unpredictable politics and powerbrokers.

His links to the monarchy were reflected in the name of his company and the former king's act of royally bestowing a surname that translates to "auspicious and prosperous light".

The private funeral at Wat Thepsirin has regal touches, with an octagonal urn among the items given by the king and court musicians playing drums and flutes.

After the bathing rites Buddhist monks will recite prayers from religious texts and the body will then be kept for 100 days before cremation, though a date has not been set.

Members of the Leicester team including coach Claude Puel are due to fly to Thailand to pay their respects after what is likely to be an emotion-packed afternoon away match against Cardiff City Saturday.

"We all spoke about ... wanting to play, it's what Vichai would've wanted and that's what we are going to do," striker Jamie Vardy told Sky Sports, adding that they would "honour his name" with their performance.

Vardy, goalkeeper Kasper Schmeichel and captain Wes Morgan, are expected to travel to Thailand along with Puel and senior staff.

Vichai leaves behind a wife and four children, two sons and two daughters.

All five are on the executive board of King Power, which faces an uncertain future.

Vichai's youngest son Aiyawatt -- better known by his nickname "Top" -- said in an Instagram post this week that his father had "left me with a legacy to continue and I will do everything I can to carry on his big vision and dreams."

The four other crash victims were identified by British police as Nursara Suknamai -- an actress and a runner-up in Miss Thailand Universe in 2005 -- and Kaveporn Punpare, both members of Vichai's staff, pilot Eric Swaffer and passenger Izabela Roza Lechowicz.

EXCLUSIVE: Deepak Chahar opens up on life in lockdown, injuries, regaining rhythm and love for guitar