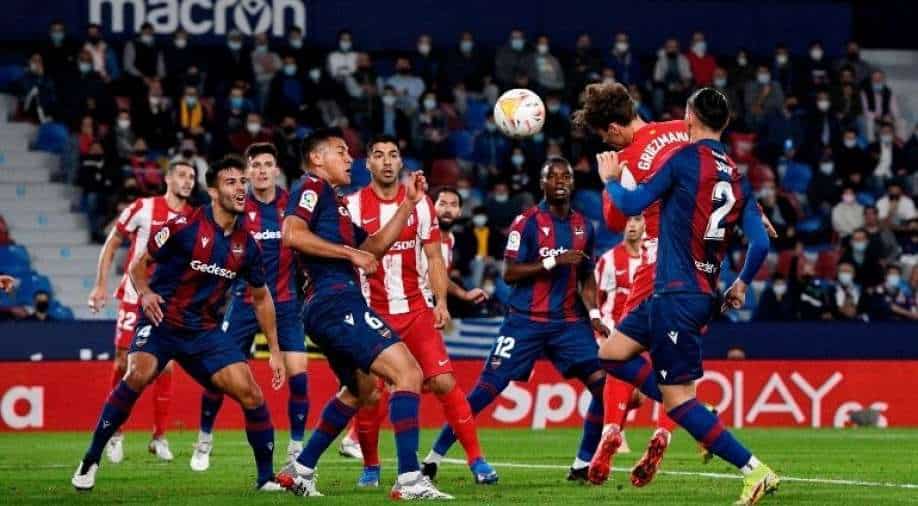 Enis Bardhi converted two penalties for Levante as they drew with Atletico Madrid 2-2 on Thursday.

Atletico Madrid conceded a last-minute penalty and had coach Diego Simeone sent off as they were held to a 2-2 draw by struggling Levante in LaLiga on Thursday.

But for the second time on Thursday, visitors Atletico surrendered their lead through a penalty, following a handball by Renan Lodi.

Enis Bardhi converted his second spot kick of the game in the 90th-minute to hand 19th-placed Levante a share of the points.
The result left Atletico in sixth place with 19 points from 10 games, five adrift of surprise leaders Real Sociedad.

Winless Levante chalked up their sixth draw of the season to move onto six points.

However, the hosts were unlucky not to have secured their first league win of the season as they also missed a couple of great chances in the closing stages.

Antoine Griezmann scored his first league goal of the season with a header to give Atletico the lead in the 12th minute.

But they then allowed Levante to take control of the game and the hosts were rewarded for their resilience when they earned a penalty in the 37th minute following a foul by Luis Suarez.

Bardhi thundered the spot kick into the back of the net to level the score at 1-1.

"We relaxed and got sloppy after scoring the first goal. Need to play better, be more concentrated", Griezmann told reporters.

An increasingly frustrated Simeone made four substitutions in the second-half and his gamble paid off when Cunha came off the bench to score Atletico`s second goal from a Rodrigo de Paul pass.

But when the referee awarded Levante their second penalty following a controversial handball by Lodi, Simeone`s anger boiled over.

The Argentine was first shown a yellow card for angrily arguing with the referee but was then given his marching orders when he continued to scream at officials.