Life isn't difficult when Rohit is at the other end: Virat 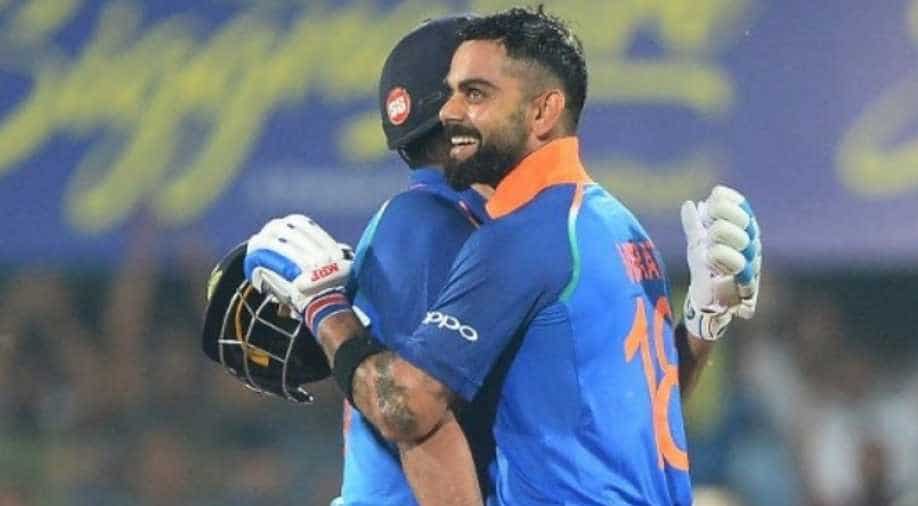 Skipper Virat Kohli Sunday hailed his partnership with Rohit Sharma after the pair hit centuries to lead India's eight-wicket demolition of West Indies in the first one-day international in Guwahati.

India, who swept the two-Test series against the visiting Caribbean side, lead the five-match ODI series 1-0.

"Feels pretty good. A convincing win. I thought West Indies were really good with the bat. And 320+ totals are always tricky," Kohli said after the win.

"But we knew it's all about one partnership. And life isn't difficult when Rohit is at the other end. It's our 5th or 6th double-century partnership, it's a pleasure to bat with him."

The effort from Kohli and Sharma easily overshadowed a dominant 106 by West Indies batsman Shermon Hetmyer in his team's 322-8 after being put into bat first.

In reply, India lost opener Shikhar Dhawan in just the second over of the innings after he was bowled by debutant fast bowler Oshane Thomas.

Kohli then took charge with Sharma, who was happy playing second fiddle to his in-form captain, as the duo put on India's biggest-ever ODI stand against West Indies for any wicket.

The skipper built on his quickfire fifty to get his 36th ODI ton in just 88 deliveries, hitting Kemar Roach for a boundary to make the three-figure mark amid loud cheers from a packed home crowd.

Sharma, who was relatively quiet till his captain's 100, soon got cracking and reached his century with a boundary off spinner Ashley Nurse.

The two marauding batsmen started to toy with the opposition bowlers before Devendra Bishoo got Kohli stumped against the run of play. Kohli smashed 21 fours and 2 sixes.

Sharma went on to hit the winning six with Ambati Rayudu, who remained unbeaten on 22, at the other end.

West Indies had their moments in the game when Hetmyer smashed six fours and six sixes during his 78-ball knock to give his side what looked like a competitive total.

Hetmyer, who registered his third ODI century in just his 13th game, built crucial partnerships including a 60-run sixth wicket stand with skipper Jason Holder, who made 38.

Bishoo, on 22, and Roach, on 26, put on 44 runs for their ninth wicket unbeaten stand to take West Indies well past the 300-run mark, which in the end proved insufficient to test the Indian batting.

"We could have got a bit more had he carried on for 5-6 more overs, but this is a young team and we will learn. Hopefully we can play a lot better in the second game."

The second ODI in the five-game series is scheduled for Wednesday in Visakhapatnam.