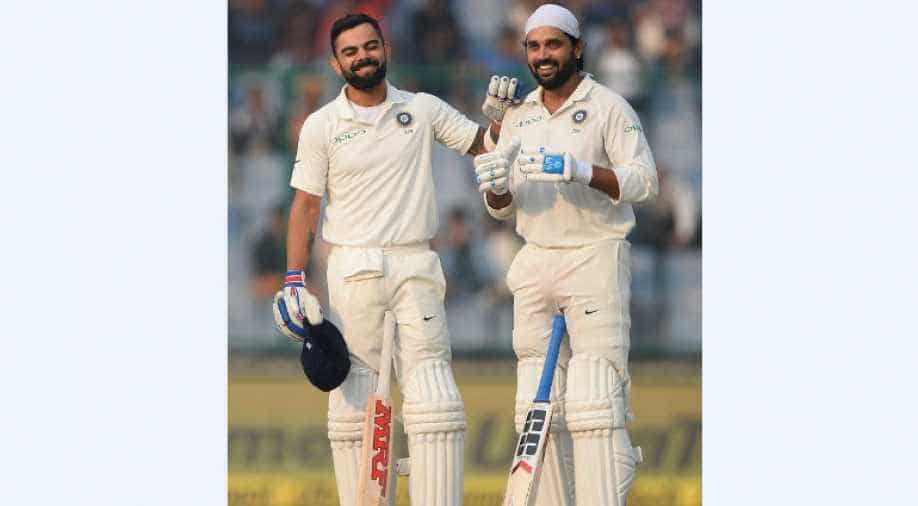 India's run-machine Virat Kohli and in-form Murali Vijay smashed big centuries in a massive 283-run stand to deflate Sri Lanka on the opening day of the third and final test on Saturday.

The tourists claimed two wickets in the morning session and two more in the final one but it otherwise was a microcosm of a series dominated by the hosts as India scored at more than four runs an over to reach 371 for four 4 at the close.

Kohli remained not out after a majestic 156, which contained 16 fours and followed his 104 not out in the first test in Kolkata and 213 in Nagpur.

Rohit Sharma was on six at the other end, with the hosts chasing a record-equalling ninth consecutive test series win after Kohli won the toss.

Right-handed opener Lokesh Rahul made way for the left-handed Shikhar Dhawan as India, 1-0 up in the series, shuffled the top of their batting order for a third match in a row.

Dhawan could not make the most of the opportunity, though, his attempted sweep shot off Dilruwan Perera finding Suranga Lakmal at deep square leg.

The opener made 23 before becoming the off-spinner's 100th test victim in a Sri Lankan record of 25 tests, two less than spin great Muttiah Muralitharan.

Paceman Lahiru Gamage stationed Sadeera Samarawickrama at leg slip and bowled the perfect delivery which Pujara tickled to the fielder to depart for 23.

Kohli, however, was simply unstoppable as the right-hander scored at nearly a run a ball, treating the weekend crowd to some exciting shot-making.

Gamage was on the receiving end of Kohli's sublime batting in an eventful 37th over when the batsman hit the bowler for three boundaries - a drive through extra cover, followed by a leg glance and an imperious pull in front of square.

Vijay brought up his 11th test century with a ninth four, celebrating the feat with a little jig.

The right-hander, who scored 128 in Nagpur, hit 13 boundaries in his elegant 155 before a lapse in concentration.

Left-arm wrist-spinner Lakshan Sandakan, one of the three new faces in the Sri Lankan team, dismissed Vijay and Ajinkya Rahane stumped in successive overs in the final session.