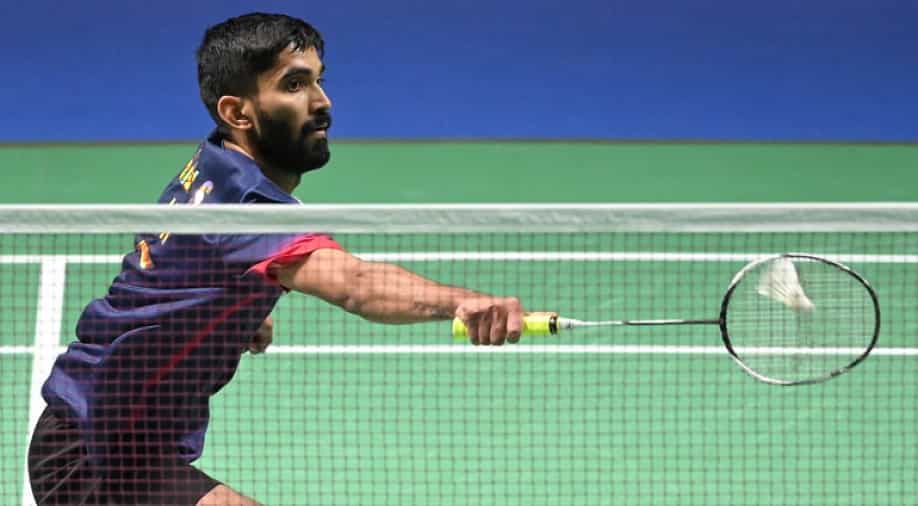 Kidambi Srikanth has become the first Indian male shuttler to enter the final of the BWF World Championships. Photograph:( AFP )

Kidambi Srikanth defeated Lakshya Sen 17-21, 21-14, 21-17 in a thrilling semi-final to create history by becoming the first Indian male shuttler to enter the final of the BWF World Championships.

Kidambi Srikanth scripted history on Saturday (December) 18 as he became the first Indian male shuttler to enter the final of the BWF World Championships after defeating Indian compatriot Lakshya Sen in a hard-fought semi-final. Srikanth got the better of 20-year-old Sen 17-21, 21-14, 21-17 in a thrilling encounter to book his place in the summit clash.

Srikanth had set up an all-Indian semi-final clash with Lakshya after a comfortable victory over Dutch ace Mark Caljouw. The ace Indian shuttler had dropped just one game in the run-up to the semi-final but went down in the first game against Lakshya, who displayed remarkable grittiness and resilience against the former world no.1.

Lakshya started the second game on a bright note once again and raced to a 5-3 lead before Srikanth fought back. The senior Indian shuttler produced some remarkable smashes and controlled the net in a brilliant fashion to close in on Lakshya and make it 8-9. He took seven out of eight points to take a slender lead and make it 11-9 in his favour.

Once in control, Srikanth didn't let Lakshya make a comeback in the second game and ended up clinching it 21-14 to force the semi-final into a decider. It was a nail-biting third game as the two shuttlers gave their all before Srikanth's patience, experience and ability to stay calm under pressure paid off as he won the game 21-17 to enter the final.

Also Read: Exclusive: 'Sports is not important than life' - Srikanth opens up on Olympics dream, recent form, life in lockdown

India are assured of two medals from the BWF World Championships 2021 with Lakshya confirmed to win a bronze and Srikanth to battle it out for the elusive gold medal in the final. The duo has joined an elite list of Indian shuttlers who have won medals in the men's singles event at the World Championships.

Srikanth will be looking to match Sindhu's golden feat from 2019 when he takes on the winner of the second semi-final between Andres Antonsen and Loh Kean Yew in the men's singles final on Sunday. Sindhu remains the only Indian to have won a gold medal at the BWF World Championships.