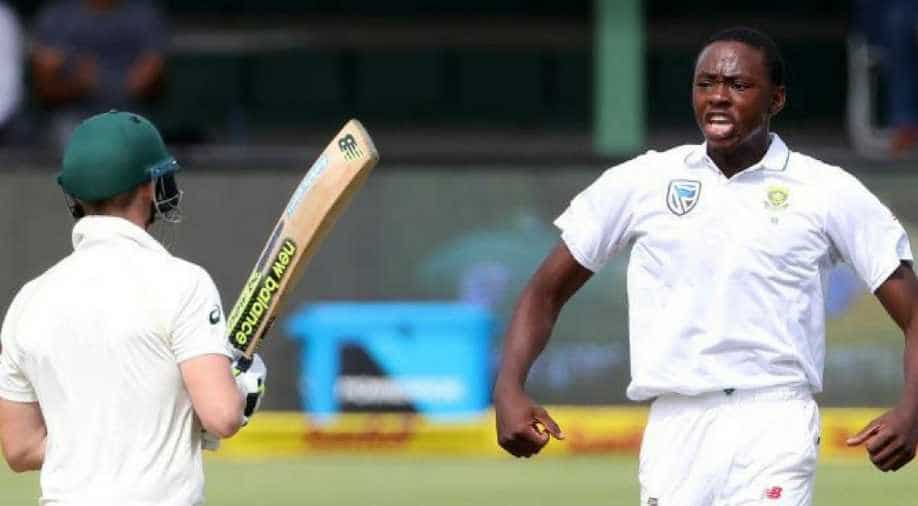 Although there was contact made with Smith, Rabada maintains that it was accidental and at the time he was not even aware he had brushed against his opponent. Photograph:( Twitter )

Australia is currently on the tour of South Africa to play a four-match Test series. Australia currently lead the highly controversial and dramatic series by 1-0.

After David Warner and Quinton de Kock row, now Kagiso Rabada has faced a level two charge by the match referee Jeff Crowe and now might miss the last two Tests of the ongoing series.

The level 2 charge has been implied due to the incident when Rabada made a shoulder contact with Australian skipper Steve Smith after sending him off on the first day of the opening Test.

#SAvAUS This nudge between Rabada and Smith will no doubt be reviewed by the match referee pic.twitter.com/2ln0tmTOln

If a player receives four or more demerit points within a two-year period, these are converted into suspension points. A suspension point amounts to a ban from one test or two ODIs, or two T20s, whichever come first.

Though, Rabada said that he will contest all the allegations as the charges related to the incident is false. The contact was accidental not deliberated.

In just one game, a lot of things has happened already and the ugly side of cricket is visible. Recently, Australian off-spinner Nathan Lyon was booked by ICC for disrespecting former South African skipper AB de Villiers.

Also, ICC has charged David Warner with 75 per cent of match fee from the first test and given three demerit points for a level two charge of bringing the game into disrepute because of an ugly verbal confrontation with De Kock.

Quinton de Kock was fined 25 percent of his match fee and given one demerit point for the heated off-field exchange.