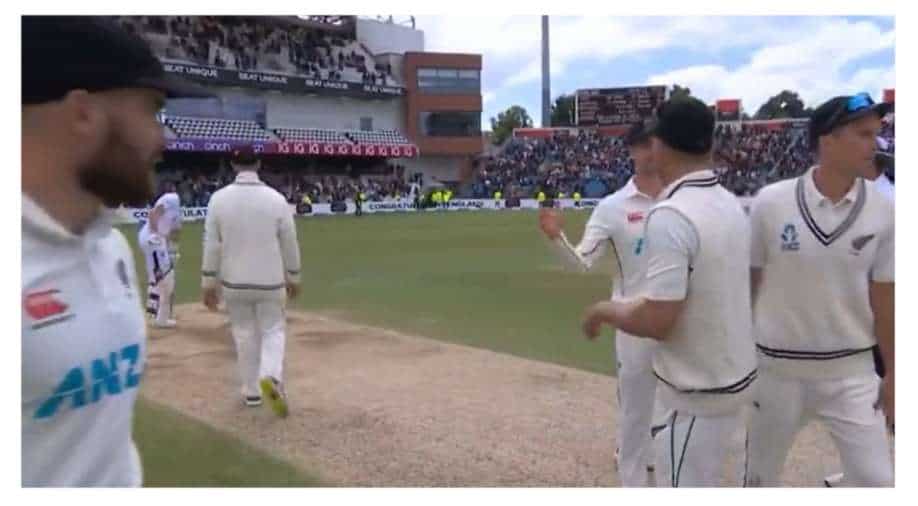 England romped past New Zealand in the third and final Test on Monday evening (June 27) to inflict a series whitewash over the World Test champions. Kane Williamson & Co. competed in every game and were even ahead by some distance on several occasions during the series, however, they failed to seize the momentum and make the most of it as Ben Stokes-led England's gung-ho approach resulted in a 3-0 win for the hosts.

Resuming Day 5 at 183-5 in pursuit of 296, after a delayed start due to rain, England lost Ollie Pope for 82 before Joe Root's unbeaten 86 and Jonny Bairstow's electrifying 71 not out, off 44 deliveries, propelled the home side to a seven-wicket win with over a session's play to spare. Following the win, the Kiwi players shook hands with the two English batters and former skipper Root won hearts with his fitting gesture towards NZ's star batter Daryl Mitchell. Here's the video:

Mitchell was the best batter throughout the series, who bailed the Black Caps out of crisis in each and every Test and slammed three tons on the trot. He amassed 538 runs (most by any) in three Tests, comprising three hundreds and two half-centuries, and was his side's Player-of-the-Series. Thus, Root -- who also was in fine form and ended with 396 runs with two tons -- lauded him via his fitting gesture and won hearts.

After the series win, Stokes told at the post-match presentation, "It's gone really well. To walk away with 3-0 series win over the best team in the world is a special start. When I took over this job, it was about changing the mindset of the guys towards Test cricket, was about having fun. Huge amount of credit to Brendon (McCullum) and the backroom staff. Trent Bridge was fantastic. Being 55/6 and to do what we did the manner we did (here), that was something special. Pottsy has taken it like fish to water. This game, he's been incredible. Broady, even at 36, bowled 50 overs this week. I wanted to push the lads to see what they were capable of. Fantastic to see Leachy taking 10 wickets. I have never seen a happier dressing room for an individual's success. Different opposition (India), we still have a series to draw. We'll come out with exactly the same mindset."