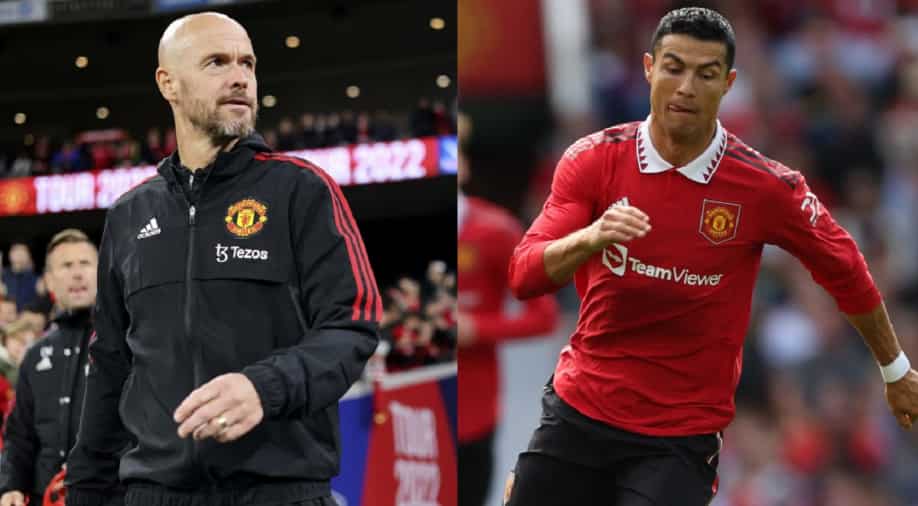 Manchester United's new manager Erik Ten Hag has slammed Cristiano Ronaldo for his 'unacceptable' behaviour after the star forward left before the final whistle during the club's friendly match against Rayo Vallecano at Old Trafford.

Manchester United manager Erik Ten Hag has ripped into Cristiano Ronaldo and other players who had left early during the club's friendly against Rayo Vallecano at Old Trafford on Sunday. Ronaldo was spotted leaving Old Trafford minutes after he was substituted by Ten Hag at halftime during the game. Some other Manchester United players also reportedly left before the final whistle.

Ronaldo's decision to leave the game early comes at a time when he has expressed his desire to leave United this summer. The Portuguese superstar who returned to the club from Juventus last summer wants to spend the final few years of his career at a club competing in the Champions League and fighting for major trophies.

He has been heavily linked with a move away from United in order to play Champions League football next season but no top club has shown any concrete interest in signing the 37-year-old. Amid endless rumours regarding his future at Old Trafford, Ten Hag has slammed Ronaldo for his 'unacceptable' behaviour during the club's friendly against Rayo Vallecano.

In an interview with Dutch outlet Viaplay Sport Nederland, Ten Hag was asked for his reaction over Ronaldo's decision to leave the stadium early during the friendly game. The United manager said it was unacceptable and that as a team each player should stay till the end of the game.

"At the beginning of the conversation, we talked about how important it is for you to have players arrive on time and your attention to details. But Cristiano seems to arrive and leave whenever he wants, how do you manage that?" - the interviewer asked Ten Hag.

"He was allowed to leave because of private reasons with his family, so what you are saying is absolutely not true," the United manager replied. He was then asked about Ronaldo leaving early - "But against Rayo, he left the game during the break," asked the interviewer.

"There were many more players who left," the United manager replied leaving the interviewer surprised. "So you think that's ok? Let it pass?" - the interviewer asked the United manager, whose love for discipline and unity and squad is a secret to none. The Dutch manager then went on to express his feelings over the matter and slammed Ronaldo and others for leaving early.

"I certainly don't condone this. This is unacceptable. For everyone. We are a team and you have to stay until the end," Ten Hag said making his intentions clear that such acts won't be tolerated in the future.

Erik ten Hag on #mufc players leaving Old Trafford early: "I do not accept this in any way. This is unacceptable. We are a team, and then you stay until the game is over." #mulive [@viaplaysportnl] pic.twitter.com/KtYEtWIcS7

Ronaldo had missed United's entire pre-season tour to Bangkok and Australia after expressing his desire to leave the club. He turned up for training last week and played 45 minutes against Rayo Vallecano where he failed to impress. While he is keen on leaving United, it remains to be seen if a top club will try to sign Ronaldo in the ongoing transfer window.