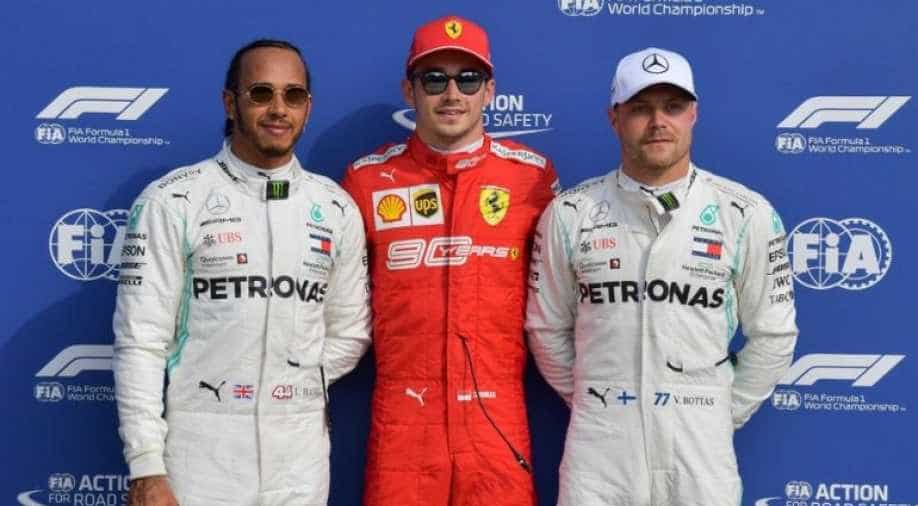 Valtteri Bottas qualified third in the second Mercedes ahead of Sebastian Vettel in the second Ferrari, the two Renaults of Daniel Ricciardo and Nico Hulkenberg and Sainz, who was seventh

Charles Leclerc secured pole for Ferrari in the Italian Grand Prix in shambolic circumstances on Saturday when only two cars participated in the final qualifying showdown laps.

An unprecedented ‘cat-and-mouse’ procession as the teams crawled round the circuit, backing each other up to claim good slipstreaming positions, resulted in a farce that saw eight cars timed out by the chequered flag.

The Monegasque and Carlos Sainz of McLaren were the only drivers to produce final qualifying runs after clocking lap-times on their first runs in Q3.

The stewards immediately declared that the shambolic failure at the end of the session was under investigation, the teams having failed to deliver a contest for the paying public.

"Today, to see so many people here feels amazing,” said a happy Leclerc, who claimed his maiden victory at last week’s tragic Belgian Grand Prix where he dedicated his win to the memory of his late friend Anthoine Hubert, who was killed in the previous day’s F2 race.

"I am happy with pole, but disappointed at the end.

"Honestly, I have to be grateful we're on the front row to have a fight with the Ferraris," said Hamilton.

"It’s a bit of an anti-climax, but we just timed out."

Valtteri Bottas qualified third in the second Mercedes ahead of Sebastian Vettel in the second Ferrari, the two Renaults of Daniel Ricciardo and Nico Hulkenberg and Sainz, who was seventh.

Red Bull new boy Alex Albon was eighth ahead of Lance Stroll of Racing Point and Kimi Raikkonen of Alfa Romeo, both of whom failed to clock a time in Q3 when Raikkonen crashed. He was uninjured.

Bottas said he and Mercedes had been unlucky to be trapped in the bunched traffic.

"The yellow flag in the last corner meant we probably missed the pole."