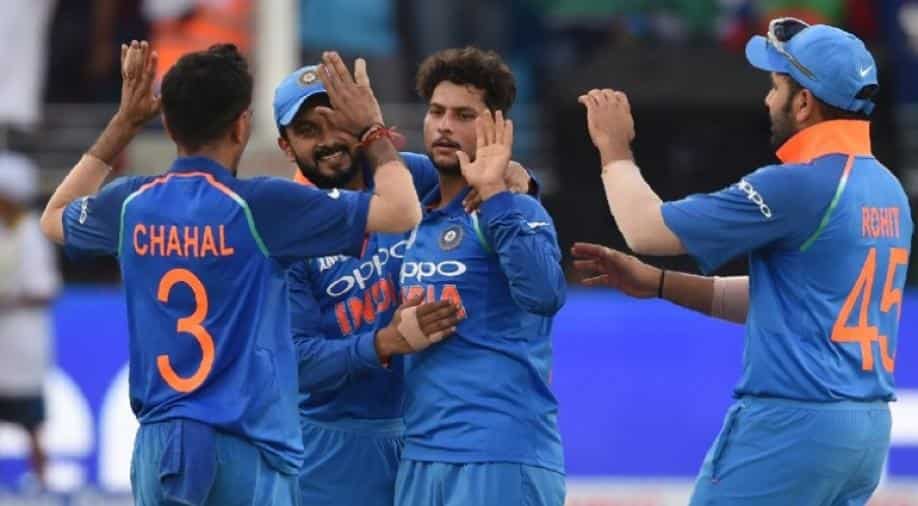 India's left-arm chinaman Kuldeep Yadav clinched four wickets to restrict New Zealand to a paltry 157 runs in the first One-day International against India at the McLean Park, Napier on Wednesday.

Williamson slammed a brilliant half-century to put up a decent fight but failed to find any partner at the other end as wickets kept falling at regular intervals.

Earlier, right-arm leg spinner Yuzvendra Chahal dismissed Ross Taylor and wicketkeeper-batsman Tom Latham in quick succession to put India in a  dominating position. Kedar Jadhav too managed to take a wicket, thanks to a brilliant catch by Kuldeep Yadav.

Opting to bat, the host lost Martin Guptill and Colin Munro for five and eight runs respectively. Both the players suffered the same fate and were clean bowled by Shami. Meanwhile, skipper Kane Williamson is going strong but requires a partner at the other end to put up a decent target for India.

Speaking after winning the toss, Williamson said, "Looks a good surface here and we want to put a score on the board. We know India are a good chasing side but we want to put runs on the board and I'm sure the surface will play the same throughout. Just the one spinner - Mitch Santner is back and also Doug Bracewell is in. It's about balancing the side, seam-bowling all-rounder is needed and that's what Bracewell comes in. I think it will be a fair pitch regardless of whether you're bowling seam, spin or batting. We were good in the SL series but want to keep improving. Looking for a good series to be played in the right spirit."

India, on the other hand, recently ended the Australia tour by creating several historic records.

Talking about their strategy for today, skipper Kohli said, "the bowlers have played a major part in us being a top team than the batsmen really. It's a batsmen's game and the crowd come in to see fours and sixes. I feel that our side is very balanced at the moment with good depth in batting and bowling. Pretty relaxed with where we stand as a team."

"It's going to be a competitive series. New Zealand are a good side and they play with the right spirit. They are a side that everyone must look upto in terms of carrying yourself on the field. Mutual respect is always there between us. Our motivation to win games remain the same irrespective of opposition. We're not going to have any incidents," Kohli concluded.