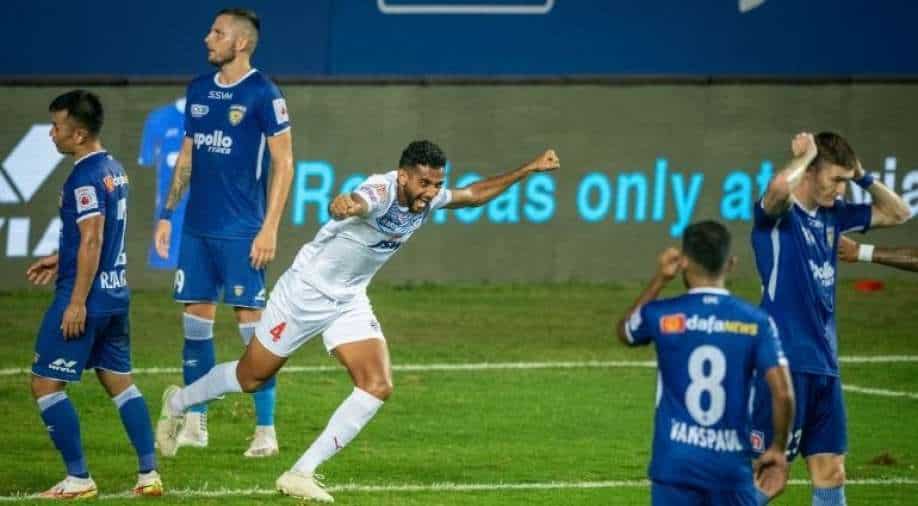 Bengaluru's wretched run came to an end as they moved to eighth in the points table from 10th with nine points from the same number of games. Chennaiyin remained on sixth place from eight games having 11 points.

Bengaluru FC snapped a seven-game winless run to record a 4-2 victory against Chennaiyin FC in the Indian Super League (ISL) at the Tilak Maidan Stadium on Thursday.

Rahim Ali (49th) got Chennaiyin level but Udanta Singh (70th) and Pratik Chowdhary (74th) ensured the Blues' wretched run came to an end as they moved to eighth in the points table from 10th with nine points from the same number of games. Chennaiyin remained on sixth place from eight games having 11 points.

A crucial win for @bengalurufc against @ChennaiyinFC as we conclude the final game of 2021! 🔥

ALSO READ: AIFF decide to postpone I-League next round on December 30, 31 amid COVID-19 outbreak

The 'home' team were off to a perfect start as Murzaev fired home in just the fourth minute after Germanpreet Singh set him up on the left flank.

The 31-year old Kyrgyzstan footballer racked up his second goal this season with a crisp finish after evading Alan Costa and Parag Shrivas. Murzaev celebrated with an acrobatic summersault as the Marina Machans went ahead in style.

The Blues failed to get a grip of the game as Chennaiyin not only bossed possession but looked slick with the ball with some eye-catching passing play.

Bengaluru needed a bit of luck and that came in the form of a penalty after a Ashique Kuruniyan shot hit Jerry Lalrinzuala`s hand inside the box.

Cleiton Silva stepped up, paused in his run-up and slammed the ball to the lower right of the keeper. In four minutes, Bengaluru doubled their advantage after a Silva corner went in off Alan Costa's shoulder as Vishal Kaith needlessly came out of his line.

Bengaluru's lead was cut short soon after the restart due to poor goalkeeping by Gurpreet.

The India No.1 failed to keep out a routine save from Rahim Ali who shot after being teed up by Murzaev.In search of a third goal, Blues' coach Marco Pezzaiuoli replaced Prince Ibara with Sunil Chhetri and minutes later the legendary India striker was involved in Bengaluru's third goal as he passed the ball to Danish Farooq who slipped it to Udanta for the pacy winger to fire home from just outside the box.

Kaith was responsible for handing Bengaluru a cushion as he let slip a regulation catch from a corner which fell to Pratik who scored with ease.