IPL 2022 final: Virender Sehwag questions R Ashwin for not sticking to off spin during GT vs RR clash 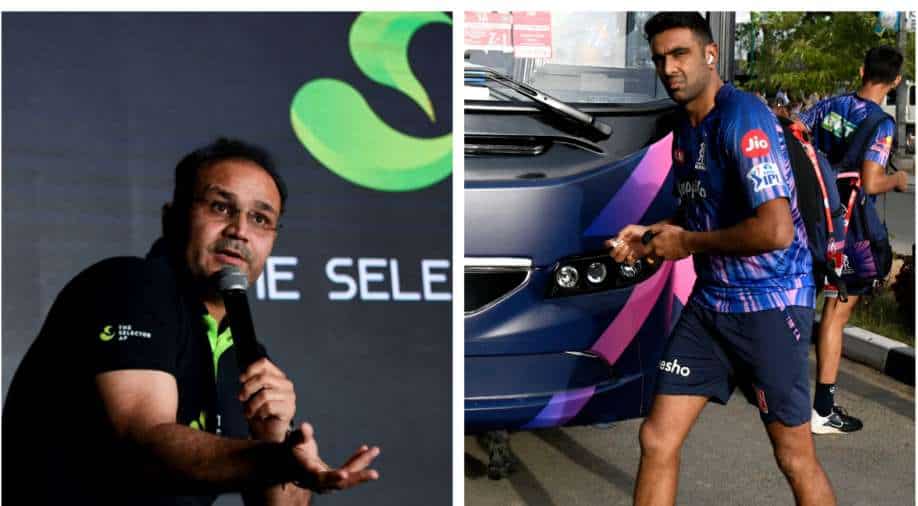 IPL 2022 final: Virender Sehwag questions Ashwin for not sticking to off spin (Photo - AFP/IPL) Photograph:( Others )

Gujarat Titans (GT) locked horns with the one-time winners Rajasthan Royals (RR) in the IPL 2022 final showdown on Sunday evening (May 29) at the iconic Narendra Modi Cricket Stadium, Ahmedabad. Despite winning the toss in the crucial encounter, the Sanju Samson-led RR franchise fell flat against the favourites Hardik Pandya-led Gujarat franchise as they went onto lift the elusive title in their maiden IPL season.

Batting first, Samson & Co. struggled as the big guns -- Jos Buttler, Samson, Shimron Hetmyer, etc. -- couldn't do much and the RR franchise posted only 130-9 (courtesy of Hardik's 3/17 and Sai Kishore's twin scalps). In reply, RR had restricted GT to 23-2, however, Hardik (34), Shubman Gill's 45* and an unbeaten 19-ball 32 from David Miller took GT home. After the clash, former Indian opener Virender Sehwag slammed R Ashwin for not resorting to his off-spin and bowling the carrom ball during the summit clash.

Sehwag has questioned Ashwin's bowling approach, saying he should have stuck to conventional off-spin on the surface. “Ashwin should have stuck with his off-spin deliveries because it was troubling the batters. Instead, he bowled his carrom balls," Sehwag told Cricbuzz.

“There was even a rough patch formed by the end, that could have troubled Gill. He could have tried to dismiss Pandya as well like that. But, his mindset is different, tries for wickets with his variations," the iconic player asserted.

Sehwag also opined that RR should have stuck to chasing, which they did brilliantly in Qualifier 2 versus the Royal Challengers Bangalore (RCB), and should also placed an extra pacer on a surface akin for fast bowlers in Ahmedabad. "RR knew how hard it is to play pacers on this surface, but they still went with both their spinners instead of a fourth fast bowling option. They will also question themselves that should they have batted first after winning the toss after chasing so well in Qualifier 2," he further added.