IPL 2022: EXPLAINED! How MS Dhoni's CSK and KKR can still qualify for the playoffs 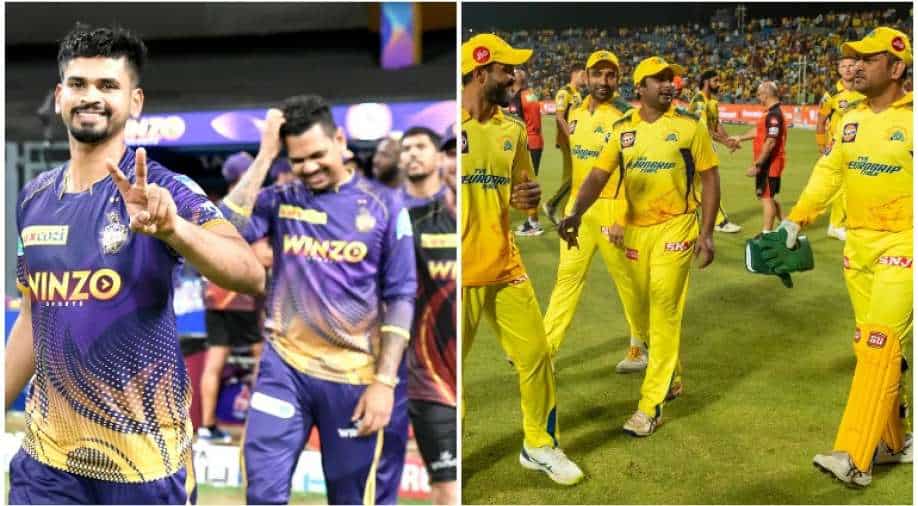 IPL 2022 EXPLAINED! How Dhoni's CSK and KKR still make it to the playoffs (Photo - IPL) Photograph:( Others )

The race for the IPL 2022 playoffs is getting intense with each passing day and match. Here's how MS Dhoni-led CSK and Shreyas Iyer's KKR can still make it to the last four:

The race for the IPL 2022 playoffs is getting intense and a bit complicated with each passing day and match. With 56 matches done and dusted in the league stage, the Lucknow Super Giants (LSG) and Gujarat Titans (GT) hold the top-two spots, respectively, and one of them are set to book a slot in the playoffs on Tuesday evening (May 10).

While Rajasthan Royals (RR) and Royal Challengers Bangalore (RCB) -- both tied on 14 points -- also look set to be the other two teams to enter the playoffs, one can expect some more twists and turns with Sunrisers Hyderabad (SRH), Delhi Capitals (DC), Punjab Kings (PBKS) and Kolkata Knight Riders (KKR) all tied on 10 points. On the other hand, defending champions and four-time winners Chennai Super Kings (CSK) are also somehow alive in the competition with 8 points from 11 games. Five-time champions Mumbai Indians (MI) are the only team confirmed to be out of the race.

As there is total chaos in the mid-table, here's how KKR and CSK -- who have lesser chances compared to the other teams stranded in the middle -- can qualify for the playoffs:

With 5 wins in 12 matches, Shreyas Iyer & Co. have 10 points. They are set to play two more matches in the league stage. The franchise can earn two more victories, at the maximum, to take their overall points tally to 14.

KKR's NRR is presently at -0.057. Since 4 teams are already of 14 points, the two-time winners need a miracle. They would hope for the above teams to lose all of their matches handsomely. Seems unlikely!

The Dhoni-led Yellow Army's case isn't much different. While CSK need to win all of their remaining three matches to remain alive, their NRR is better (+0.028) -- following the big victory over DC -- and gives them a better chance in comparison to KKR to progress ahead.