IPL 2021: Ziva Dhoni breaks the internet as she prays for CSK, sitting on Sakshi's lap, during DC face-off 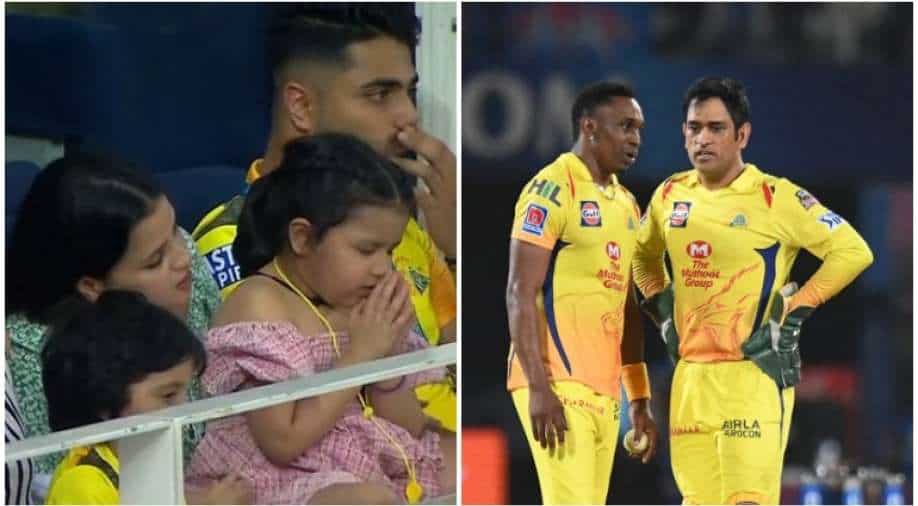 IPL 2021: In match 50 of the season, MS Dhoni-led CSK lost to Rishabh Pant's DC by 3 wickets. Ziva Dhoni, sitting on Sakshi's lap, prayed for the Yellow Army as her image went viral in no time.

Match 50 of the IPL 2021 edition saw the MS Dhoni-led Chennai Super Kings (CSK) face the Rishabh Pant-led Delhi Capitals (DC) in a bid to ensure a top-two finish with a win. While the contest went down the wire, Pant & Co. emerged on top to complete a double over the three-time champions this season and assure themselves of a top-two finish; getting an extra chance to enter the final.

On the other hand, CSK's batting was a huge letdown as none of them got going as the Yellow Army posted a modest 136-5, being asked to bat first, courtesy Ambati Rayudu's 55*. The likes of Ruturaj Gaikwad, Moeen Ali and Faf du Plessis couldn't do much whereas Dhoni played an uninspiring 27-ball 18. While the CSK bowlers took the game deep, with Shardul Thakur and Ravindra Jadeja returning with two wickets apiece, Chennai lost the game in the last over by 3 wickets.

When the match was nicely poised in the end overs, there was a tense environment at the stands where cameramen spotted Dhoni's 6-year-old daughter Ziva praying for the franchise. Her image, sitting on Sakshi Dhoni's lap, went viral in no time:

ALSO READ | MS Dhoni wasn't the only one who struggled: Stephen Fleming defends CSK skipper after poor show against DC

With a narrow defeat, CSK are still sure to progress to the playoffs, however, they will hope to return to winning ways when they lock horns with Punjab Kings (PBKS) in their last league stage encounter and end in the top-two. Meanwhile, DC will play Virat Kohli's Royal Challengers Bangalore (RCB) in their remaining group stage clash.