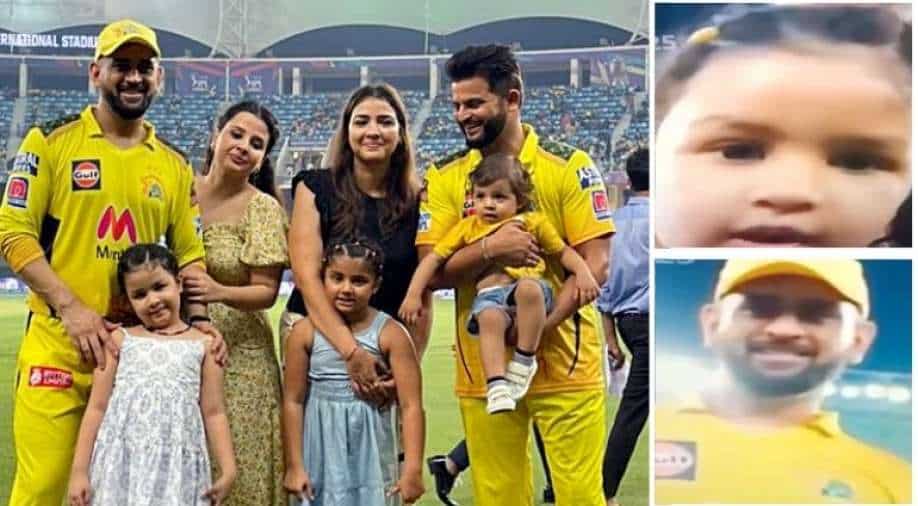 After Chennai Super Kings aka 'Dad's Army', clinched their fourth Indian Premier League (IPL) trophy, the young members of the CSK family were spotted having a gala time, celebrating the winning moment most adorably at the Dubai International Cricket Stadium.

On Friday (October 15), CSK defeated Kolkata Knight Riders (KKR) by 27 runs to win the 14th edition of the cash-rich cricket league. After posting a total of 192/3, Ravindra Jadeja and Shardul Thakur took command of the bowling department and restricted KKR to 165/9.

Mahendra Singh Dhoni, the skipper of CSK, collected the coveted trophy from the Board of Control for Cricket in India (BCCI) president Sourav Ganguly and handed it over to young pacer, Deepak Chahar.

With beautiful fireworks and glittery confetti, CSK celebrated the win in Dubai with their family, among several cute videos, a clip of Dhoni's daughter Ziva and Suresh Raina's daughter Gracia playing with the camera went viral on the social media forums.

ALSO READ | From perfect catch to highest runs: List of all the awards in IPL 2021

During the match, Faf du Plessis hit a magnificent 86 off 59 balls as CSK made 192 for three in the IPL 2021 summit clash. He continued his fine form as he struck seven fours and three sixes during his knock after CSK were invited to bat.

"We shuffled a few players, we used them in different ways," Dhoni said of their turnaround after collecting the trophy. "It was important to take responsibility and we had match-winners coming game after game and performing. People who were in form, they made sure they were scoring throughout the tournament, and everybody else was chipping in," he added.

On the other hand, Kolkata, led by England white-ball captain Eoin Morgan, got off to a flying start with openers Shubman Gill and Venkatesh Iyer smashing individual fifties. Gill made 51 and Iyer scored 50 before wheels came off their innings and two-time champions Kolkata, cruising at 91-0 in the 11th over, eventually finished on 165-9.