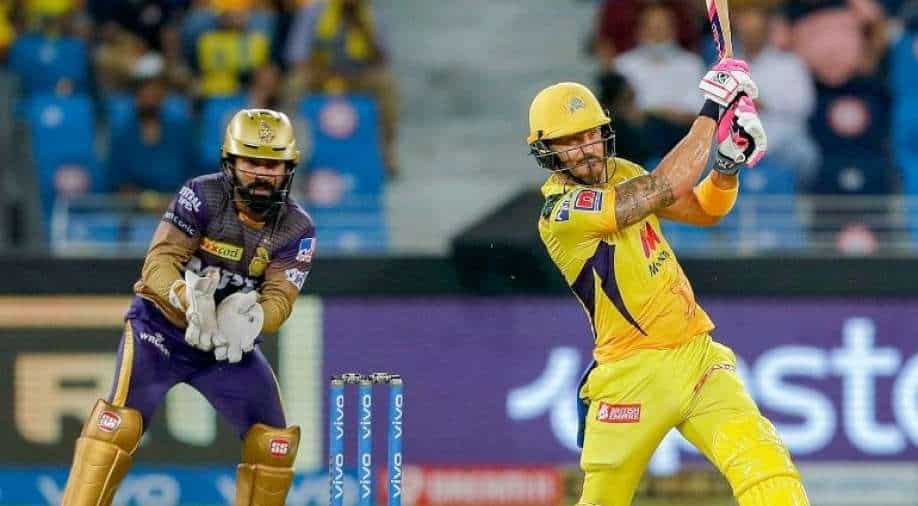 Dubai: Faf du Plessis of Chennai Super Kings plays a shot during the final of the Indian Premier League 2021 between the Chennai Super Kings and the Kolkata Knight Riders, at the Dubai International Stadium, UAE, Friday, Oct. 15, 2021. (PTI Photo/Sportzpics for IPL) Photograph:( PTI )

After posting a formidable total of 192/3, Ravindra Jadeja and Shardul Thakur impressed with their bowling skills to restrict KKR at 165/9

Mahendra Singh Dhoni-led Chennai Super Kings (CSK) won the coveted Indian Premier League trophy for the fourth time after defeating Kolkata Knight Riders (KKR) by 27 runs in the final clash of the 14th edition of IPL at Dubai International Cricket Stadium on Friday (October 15). After posting a formidable total of 192/3, Ravindra Jadeja and Shardul Thakur impressed with their bowling skills to restrict KKR at 165/9.

"We shuffled a few players, we used them in different ways," Dhoni said of their turnaround after collecting the trophy.

"It was important to take responsibility and we had match-winners coming game after game and performing. People who were in form, they made sure they were scoring throughout the tournament, and everybody else was chipping in," he added.

A round of applause for @KKRiders, who are the runners-up of the season. 👍 👍

In the first innings, Faf du Plessis hit a magnificent 86 off 59 balls as CSK made 192 for three in the IPL 2021 summit clash. He continued his fine form as he struck seven fours and three sixes during his knock after CSK were invited to bat.

He first put up 61 runs with his opening partner Ruturaj Gaikwad (32) and that was followed by a 63-run stand with Robin Uthappa (31 off 15 balls) for the second wicket. Gaikwad claimed the orange cap as the tournament's leading scorer. Robin Uthappa (31) and Moeen Ali (37 not out) made useful contributions.

Moeen Ali then made a late flourish with a stroke-filled 37 not out off 20 balls, laced with two fours and three sixes as he stitched a 68-run stand with du Plessis. CSK added 112 runs in the back end of their innings after they were 80 for one at the halfway mark.

Kolkata, led by England white-ball captain Eoin Morgan, got off to a flying start with openers Shubman Gill and Venkatesh Iyer smashing individual fifties. Gill made 51 and Iyer scored 50 before wheels came off their innings and two-time champions Kolkata, cruising at 91-0 in the 11th over, eventually finished on 165-9.

Shardul Thakur (3-38) dismissed Iyer and Nitish Rana in the same over, and left-arm spinner Ravindra Jadeja also bowled a two-wicket over to rip the heart out of Kolkata's middle order.

All-rounder Jadeja also took two stunning catches in the deep as Chennai, who missed the playoff for the first time last year, went on to claim the title.

Morgan scored four as his lean run with the bat continued ahead of the Twenty20 World Cup beginning on Sunday. "Our guys fought incredibly hard and performed but today, unfortunately, proved just one game too many," said the England captain. For KKR, Sunil Narine took two wickets for 26 runs.

The second half of this year's IPL was shifted to the United Arab Emirates following a COVID-19 surge in India.