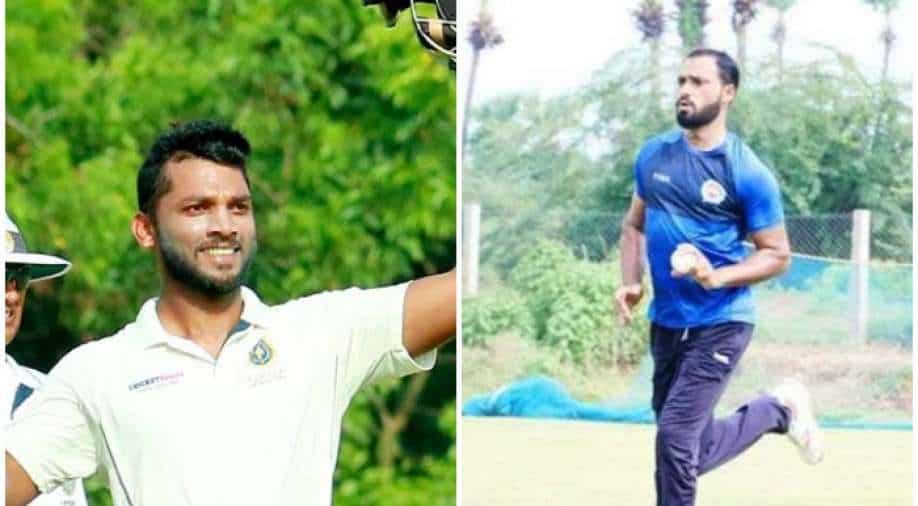 Wicketkeeper-batsman Vishnu Vinod and left-arm medium-fast bowler Lukman Meriwala are eager to show their mettle under Captain Shreyas Iyer and Coach Ricky Ponting in the Indian Premier League (IPL) 2021. The talented domestic players were picked up by the Delhi Capitals at their base price of Rs 20 lakh in the IPL Auction on 18 February 2021.

Wicketkeeper-batsman Vishnu Vinod and left-arm medium-fast bowler Lukman Meriwala are eager to show their mettle under Captain Shreyas Iyer and Coach Ricky Ponting in the Indian Premier League (IPL) 2021. The talented domestic players were picked up by the Delhi Capitals at their base price of Rs 20 lakh in the IPL Auction on 18 February 2021.

Vishnu Vinod, who plays for Kerala in domestic cricket, has scored 906 runs, taken 10 catches and effected 5 stumpings in 35 matches in his T20 career. Meanwhile, Lukman Meriwala has picked up 72 wickets in 44 matches at an average of 14.54 in T20s. The 29-year-old, who plays for Baroda in domestic cricket, finished as the second-highest wicket-taker in the Syed Mushtaq Ali Trophy 2021 with 15 scalps.

The 27-year-old, who played three matches for RCB in IPL 2017, spoke about his experience of sharing the dressing room with AB de Villiers, " I look up to AB de Villiers. I was in awe of AB when I saw him and got to be with him in person. I was too shy to even talk to him. During a team meeting, he once told me 'I will be watching you'. He told me to practice breathing while batting to help me attain clarity while thinking and playing. I have been practising that ever since he told me."

Meanwhile, Lukman Meriwala is looking forward to spending time with Delhi Capitals' speedsters Ishant Sharma, Umesh Yadav and Kagiso Rabada. "I am really happy to join the Delhi Capitals. My family and the people in my village are also very happy. I am looking forward to speaking with Ishant (Sharma) bhai, Umesh (Yadav) bhai and Kagiso Rabada in the camp. Whenever I make a mistake, I will speak to them and work on my mistakes."

After a fantastic performance in the Syed Mushtaq Ali Trophy 2021, the fast bowler expected to be picked by an IPL team in the auction. However, it was still a surreal feeling for the 29-year-old when he heard that he had been acquired by an IPL team for the first time in his life.

"When the Syed Mushtaq Ali Trophy 2021 was held, I didn't think about anything else and focussed on only that tournament. After doing well there, I expected to be picked by an IPL team this year. When the auction was going on, I was practising in the nets in Surat. The Vijay Hazare Trophy was going on that time. Our team's (Baroda) video analyst came to the nets and told me that I have been picked by Delhi Capitals. I stopped bowling immediately and was so happy to hear the news. Our nets session was also paused for five minutes as all the players in my team congratulated me," said Meriwala.

The fast bowler has had to endure a long and hard journey until he achieved his IPL dream. Meriwala had given up on cricket at one point, but with his father's support, he has worked his way up the levels of professional cricket.

"I started playing cricket in 2003, but I was playing only club cricket then and I couldn't find a way to move forward. So, I lost hope and gave up cricket, and started working as a welder in 2007. After around two years, my father told me that he would support my career no matter what. Then I played a U-19 tournament for Baroda. After which, I kept working hard and kept moving up the ranks. After returning to cricket in 2009, I made my Ranji Trophy debut in 2017," said the 29-year-old.