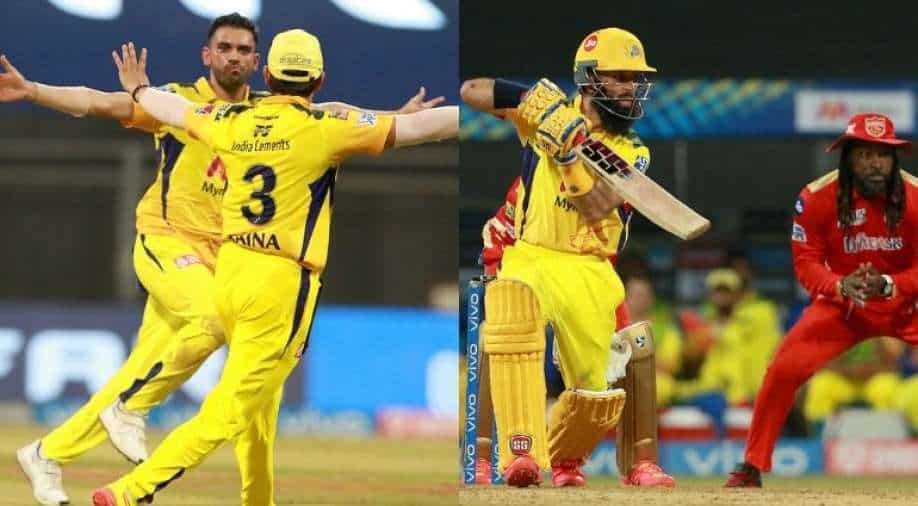 Chennai Super Kings won the toss and chose to bowl. The decision immediately paid off as Deepak Chahar was off to a fiery start. The bowler dismantled Punjab Kings' top order within the powerplay.

Chennai Super Kings open their account in the Indian Premier League 2021 after beating Punjab Kings by --- wickets in Match 9 at the Wankhede Stadium in Mumbai.

Chennai Super Kings won the toss and chose to bowl. The decision immediately paid off as Deepak Chahar was off to a fiery start. The bowler dismantled Punjab Kings' top order within the powerplay.

Mayank Agarwal and Nicholas Pooran were out for a nought as Gayle and Hooda scored 10 runs each. Skipper KL Rahul became the victim of Ravindra Jadeja's brilliant fielding as the in-form skipper was run out while batting on 5 runs.

There were no such partnership in the Punjab Kings innings as the wickets kept tumbling. However, newbie Shahrukh Khan played a crucial knock to take Punjab, who were once at 26/5 to a 100+ score. The batsman was three runs short of smashing his maiden half-century before getting dismissed by Sam Curran. Chennai bowlers did not have to do much and restricted the Punjab Kings to 106 at the end of the 20 overs.

Chennai Super Kings, on the other hand, did not face much of a challenge. They lost Ruturaj Gaikwad early in the powerplay itself.

However, a 66-run partnership of Faf du Plessis and Moeen Ali landed a fatal blow to the Punjab Kings.

Despite losing few wickets in the latter stages, Dhoni and Co. registered a thumping victory to open their account in IPL 2021 and this surely will boost their morale. With this win, CSK go to the second position pushing SRH to the bottom of the table, whereas, Punjab Kings slip to the seventh spot.

Chelsea and Barcelona gear up for Women's Champions League Final