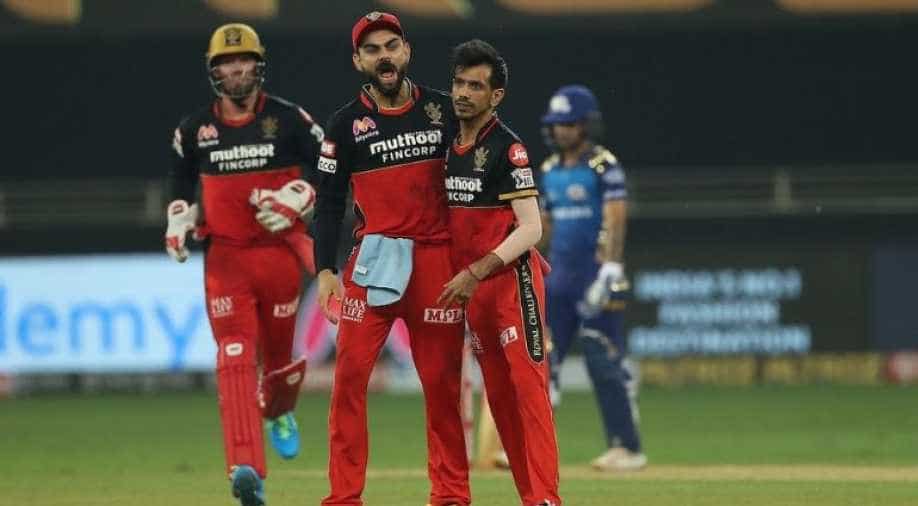 This is the team that’s taking Bangalore to the Playoffs: Harsha Bhogle (Photo: BCCI/IPL) Photograph:( Twitter )

In the super over, Navdeep Saini restricted the Mumbai Indians to 7 runs. Bumrah for Mumbai Indians failed to stop the Royal Challengers batsmen from scoring 8 runs in the over.

Royal Challengers Bangalore seal their second win in IPL 2020 after beating Mumbai Indians in super over on Monday at the Dubai International Stadium in Dubai. Another day, another thrilling match in IPL 2020.

Mumbai Indians won the toss and chose to field. The decision immediately backfired after Devdutt Padikkal and Aaron Finch were off to a flyer. Both openers put up a partnership of 81 runs in just first 9 overs. However, the Finch got out right after his half-century. RCB skipper Virat Kohli's woeful run in IPL 2020 continued as he got out on a single-digit yet again. But, Padikkal and de Villiers quick-fire partnership and half centuries kept RCB in front. Dube graced Bangalore innings by smashing three sixes in the final over helping the Challengers breach the 200-mark. By the end of first innings, RCB were 201/3.

Mumbai were off to a promising start as RCB conceded 14 runs in the first over. However, back-to-back wickets in two overs but RCB back in the game. Hardik Pandya and Ishan Kishan tried to take the innings forward but the partnership broke when Adam Zampa removed Hardik Pandya. But the 100-run partnership between Kishan and Pollard kept Mumbai in the game and made a brilliant comeback to take the lost match into the super over. Ishan Kishan got out on 99 but Pollard's pull took the ball to a boundary to ensure a super over.

In the super over, Navdeep Saini restricted the Mumbai Indians to 7 runs. Bumrah for Mumbai Indians failed to stop the Royal Challengers batsmen from scoring 8 runs in the over.