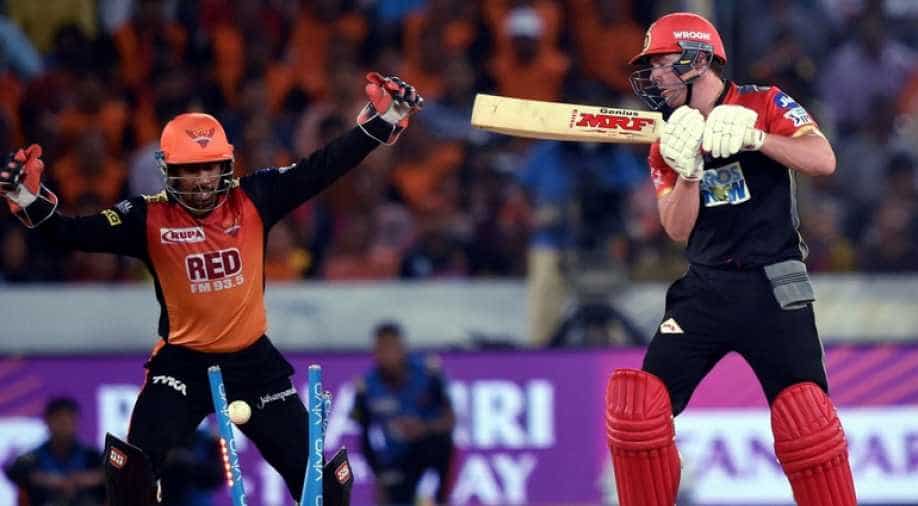 Hyderabad has won eight out of 10 games played in the Indian Premier League (IPL) Photograph:( PTI )

Hyderabad once again managed to defend a paltry total of 146 runs, as they defeated Virat Kohli-led Bangalore by five runs at the Rajiv Gandhi International Stadium on Monday.

Skipper Virat Kohli and Colin de Grandhomme were the top scorers for Bangalore.

While Kohli made 39 before giving away his wicket to Shakib, de Grandhomme contributed 33 runs before being clean bowled by Bhuvneshwar Kumar.

Openers Manan Vohra and Parthiv Patel together contributed just 28 runs in which Vohra made 8 while Patel made 20 runs.

AB de Villiers once again failed to leave any mark as he was departed by Rashid Khan after making just 5 runs.

Tim Southee and Mohammed Siraj three-wicket haul each restricted Hyderabad to a modest total of 146 runs.

The two bowled with impressive line and length to deplete Hyderabad's batting line-up.

Skipper Kane Williamson again stood up for his team and smashed a half-century to recover from the early loses.

Later, Shakib Al Hasan took the driver's seat for the franchise but could not contribute more than 35 runs.

Dhawan and hales failed to leave any mark today as the two were sent back to the pavilion by Siraj and Southee respectively.

Virat Kohli won the toss and opted to bowl at &nbspRajiv Gandhi International Stadium against Hyderabad on Monday.

Virat said that the team chasing has done well in the ongoing tournament and the pitch is also good. The bowlers have performed good at this pitch and the team just need to support with better fielding, said skipper Virat Kohli.

On the other hand, Kane Williamson has not made any change in the playing XI.