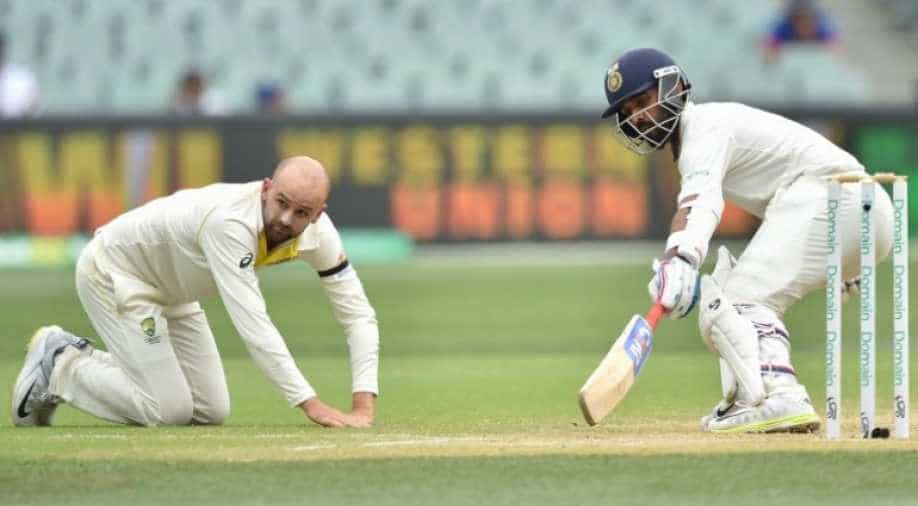 Spinner Nathan Lyon made difference on the fourth day of opening Test against Australia in Adelaide but still, Australia have a mountain to climb for an unlikely win.

In his next over, he struck again and got Rohit Sharma's wicket. Peter Handscomb took a stunning one-handed catch at the silly point to dismiss Sharma at a score of one run.

India piled on the runs to stretch their lead to 275 with Cheteshwar Pujara and Ajinkya Rahane hitting composed half-centuries.

At lunch, India were 260 for 5, leading by 275 after adding 109 to their overnight score for the loss of two wickets.

Just after returning from lunch, Lyon got Rishabh Pant's wicket.

Lyon got the prized scalp of Rahane who returned to the pavilion after scoring 70 runs.

Soon after that, Marcus Harris got Ashwin's wicket.

Lyon struck again and sent back Mohammed Shami on a duck.

Pujara followed up his first innings century with another patient and controlled 71, finally undone by the spin of Nathan Lyon with Aaron Finch taking a bat-pad catch.

Australia took the second new ball which was available to them.

Play started 30 minutes early to make up for rain disruptions on Saturday. The temperature is 22-degree Celsius and the sun is out, it is expected that there will not be any delay due to rain.