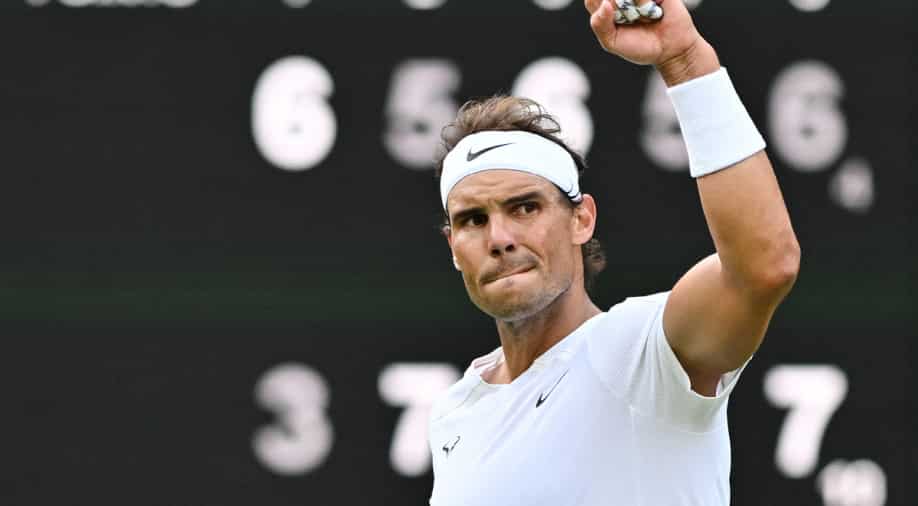 Rafael Nadal defeated Taylor Fritz in an epic thriller to enter the men's singles semi-final at Wimbledon 2022. It was a stunning performance from one of the greatest of all time in a gruelling contest which lasted over four hours.

At one stage, Rafael Nadal for a while thought he might not be able to finish the quarter-final against Taylor Fritz but he yet again proved why is he regarded as one of the greatest there ever will be with a performance to remember despite being in a considerable amount of pain on the court. Nadal fought through the pain to defeat Fritz in an epic five-set thriller at the Wimbledon 2022 on Monday (July 06) to storm into the semi-final.

The indomitable Spaniard once again left the spectators in awe of his remarkable grit and determination to pull off a sensational victory in a gruelling contest which last four hours and 21 minutes. Nadal defeated  3-6 7-5 3-6 7-5 7-6(4) to enter the last four at Wimbledon, making it his third Grand Slam semi-final appearance in a row this year.

He has been absolutely unstoppable right from the start of the year and has continued his magnificent run at Wimbledon 2022. After clinching the Australian Open and the French Open, Nadal's chase of an elusive 23rd Grand Slam continues at Wimbledon as he now stands just a couple of steps away from scripting history by winning a hat-trick of Grand Slams this year.

The mentality of a champion who never quits#Wimbledon | #CentreCourt100 | @RafaelNadal pic.twitter.com/PEKGN1R9fU

His quest for a calendar year Grand Slam is also on with the thrilling victory over Fritz which is arguably one of his best performances of the year. Nadal didn't have the ideal start in the quarter-final clash against Fritz as the American clinched the opening set comfortably to create pressure on the Spaniard.

However, Nadal remained unfazed despite opting for a medical time-out during the second set for an abdominal issue. He was asked by his father to not continue but the 22-time Grand Slam champion, who remains one of the fiercest competitors in the history of the sport, came back to find his way through pain and misery as he showcased his class against the American.

Nadal took the second set 7-5 but that didn't deter Fritz, who was absolutely on top of his game and was not letting the Spaniard take control of the proceedings. With Nadal struggling to serve due to his injury, Fritz clinched the third set before Nadal broke the American's serve a third time to win the fourth set forcing the quarter-final into a decider.

The deciding fifth set was forced into a 10-point deciding tie-breaker after an epic battle between the duo on the Centre Court but it was Nadal who came out on top at the end clinching the tie-breaker 10-4. Nadal will now face Australian Nick Kyrgios in the much-awaited semi-final on Thursday (July 07).

It was a draining contest for both as the duo gave their all with Nadal admitting after his win that it wasn't an easy match at all. He also spoke about his injury and said at one stage it felt like he might not be able to complete the match but managed to do so at the end.

“From my personal side, it was not an easy match at all.  So just very happy to be in the semi-finals, that’s all. The body in general [is] fine. Of course in the abdominal something is not going well, being honest. So yeah, I had to find a way to serve a little bit different," said Nadal.

“In a lot of moments I was thinking maybe I will not be able to finish the match but I don’t know: the court, the energy something else," he added, thanking the supporters.