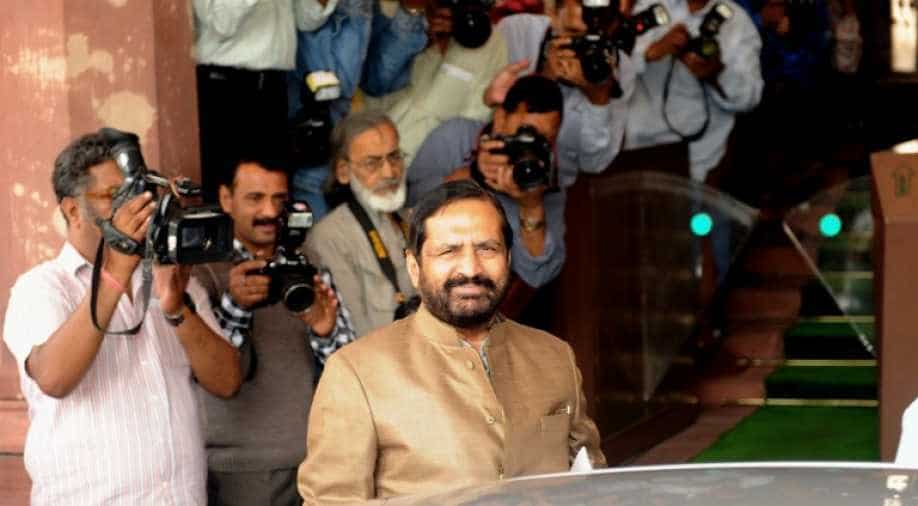 Suresh Kalmadi (in pic) and Abhay Chautala were appointed life president of the Indian Olympic Association on Tuesday. Photograph:( AFP )

The appointment of Chautala and Kalmadi as life presidents led to widespread criticism, prompting the Sports Ministry to issue a show cause notice to the IOA on Wednesday. The ministry had warned it would cut all ties with the national Olympic body until Kalmadi and Chautala were removed.

The government took the decision after IOA failed to reply to its show cause notice with the deadline ending at 5 pm today, PTI reported.

The IOA, on its part, had sought 15-days time from the Sports Ministry stating that its president N Ramachandran was out of the country.

"The government can't approve of wrong things. The show cause notice issued to the IOA was a serious one but they didn't respond and instead sought 15 days time. So the government has decided to suspend IOA till the time they withdraw the appointments," Sports Minister Vijay Goel said, adding that the government considered the IOA's reply only as a ploy to buy time.

"The IOA now can't take any financial assistance, facilities and privileges from the government till the time they are suspended," Goel added.

The government was not satisfied with the response of IOA since they have not given any substantive reply especially with regard to the non-eligibility of Kalmadi and Chautala.

The IOA will now cease to enjoy the privileges and prerogatives bestowed on it by the government as the National Olympic Committee (NOC).

"This is a serious violation of the norms of good governance by IOA which is the mother sports body and corrective action needs to be taken immediately as it is a matter of national prestige and public sentiments.

"Although the government has utmost respect for the Olympic Charter and is committed to protecting the autonomy of sports, it cannot remain a mute spectator to blatant violation of principles of ethic and good governance by IOA, thereby putting the image and prestige of the country at stake," the Minister said.

"By appointing charge sheeted persons the IOA has flouted all rules and regulations mentioned in its own Constitution and that of International Olympic Committee.

Sports Minister Vijay Goel had criticised the IOA's appointment saying that the move was "totally unacceptable" as both Kalmadi and Chautala were facing serious criminal and corruption charges.

Kalmadi, a former IOA president, eventually declined the post on December 29, amid increasing clamour for his removal.

Chautala remained defiant, threatening legal action against Sports Minister Vijay Goel, asserting that he would decline the post only if told to do so by the International Olympic Committee (IOC).

"I am disturbed about a development in IOA AGM in Chennai on December 27. I am told by the members present in the AGM that this particular discussion, i.e nomination of Life President, took place as last item in `any other item` and was proposed and approved in a total of one minute without any discussion," Batra said in a letter to IOA President N. Ramachandran and Secretary General Rajeev Mehta.

Chautala, legislator from the Indian National Lok Dal in the Haryana government, served as the president of the IOA from December 2012 to February 2014. He has been charged in a disproportionate assets case and is being investigated by the CBI.

Kalmadi served as the IOA president from 1996 to 2011 and was jailed for 10 months for his involvement in the 2010 Delhi Commonwealth Games corruption scandal. He spent 10 months in prison and was later released on bail.