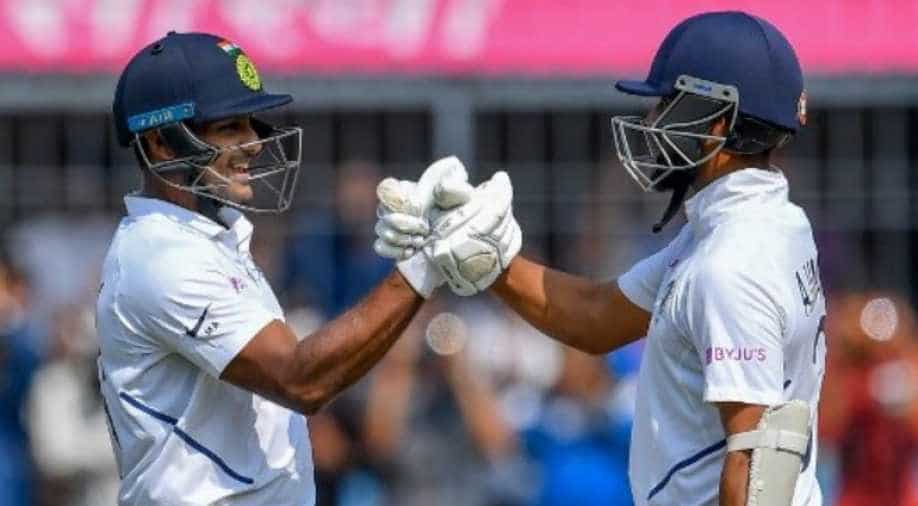 India's Mayank Agarwal (L) celebrates with teammate Ajinkya Rahane after scoring his century (100 runs) during the second day of the first Test cricket match of a two-match series between India and Bangladesh at Holkar Cricket Stadium in Indore on November 15, 2019. Photograph:( AFP )

India is yet to declare it's innings and will plan to extend its lead on the third day.

As the second day of Indore test concluded India scores a massive of 493/6. Bangladesh cricket team, that looked helpless almost all day have conceded a massive trail of 343.

Half-centuries by Cheteshwar Pujara (54), Ajinkya Rahane (86) and Ravindra Jadeja to power India to such a score. Virat Kohli fails to impress and falls for a duck.

A double ton by Mayank Agarwal and Ajinkaye Rahane's 86 power India to a mammoth lead of 343, they Indian-duo had a 190 runs partnership that stabilized India after falling of two quick wickets (Cheteshwar Pujara and Virat Kohli)

Bangladesh were all out on 150 on the previous day, and such a dominating display by India on both the days has put the Bangladeshi team on backfoot. India is yet to declare it's innings and will plan to extend its lead on the third day. Let's stay tuned for the remainder of three days left in the Indore test match.

Recently, India defeated Bangladesh in the three-match T20I series 2-1. Bangladesh was able to win the first T20I at Delhi, and en route they registered their first-ever victory over the Men in Blue in the shortest format of the game. But the hosts were able to come back in the next two matches at Rajkot and Nagpur to win the series. In the final match of the series, Deepak Chahar starred with the ball as he recorded the best-ever bowling overs in T20Is. Chahar had finished with the bowling figures of 6-7 in the match.