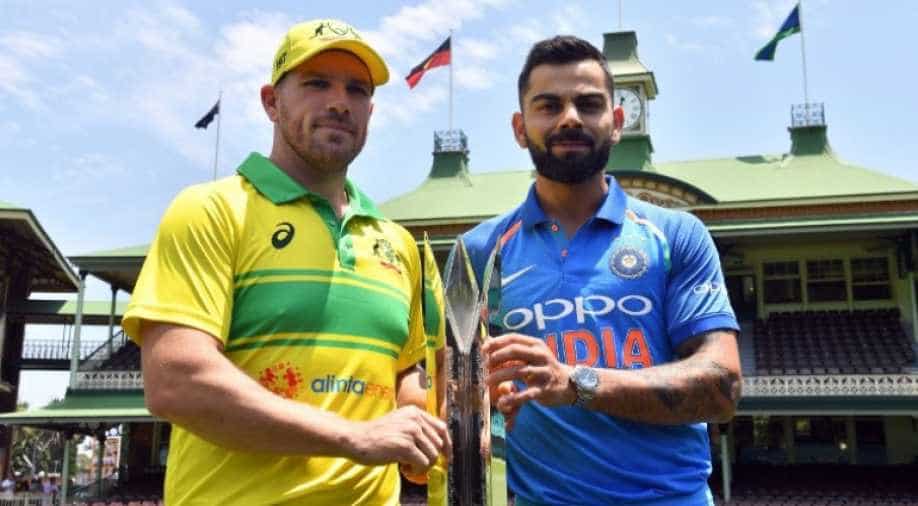 India and Australia will look to fine-tune their World Cup preparations in the three-match ODI series.

Hit hard by an unexpected controversy after the high of the Test triumph, India will look to fine-tune their World Cup preparations in the three-match ODI series against an under-fire Australia, beginning here on Saturday.

On the eve of the opening game, the BCCI suspended Hardik Pandya and KL Rahul pending an inquiry for their inappropriate remarks on women during a TV show, effectively ruling them out of the series.

While Pandya was a certainty in the playing XI, an out-of-form Rahul was not in contention to play on Saturday.

Skipper Virat Kohli on Friday condemned the comments made by his two teammates and said the team does not align with the "individual opinions".

"The two concerned players (have) felt what has gone wrong and they have understood the magnitude of what's happened," he said in the pre-match press conference.

Rahul was unlikely to get a go owing to both his poor form and the presence of a well-settled opening pair in Rohit Sharma and Shikhar Dhawan. More significant is Pandya's absence as the all-rounder provides crucial balance to the ODI side with his ability to bowl 10 overs as well as bat in the middle order.

Pandya's absence means that India will have to rejig their attack. Jasprit Bumrah has already been rested for this series, as well as the tour of New Zealand, and this allows the think-tank to conduct one final experimentation with their bowling attack.

It's time for ODI cricket. Who do you reckon will lift this trophy after the end of the 3rd game.#AUSvIND pic.twitter.com/ESskDamvDj

Bhuvneshwar Kumar is a shoe-in, and thereafter it depends if Kohli wants to go in with a three-man pace attack to compensate for Pandya's loss.

In such a scenario, Mohammed Shami and Khaleel Ahmed are expected to get the nod, as India continue zeroing on the pace quartet for the World Cup squad. There is a sprinkling of grass on the SCG pitch and it could push the Indian skipper to opt for a three-pacer and two-spinner combination.

Kohli also stated that, in Pandya's absence, Ravindra Jadeja would step up as the all-rounder. He would partner up with left-arm wrist spinner Kuldeep Yadav as India's five-pronged attack, with Kedar Jadhav fulfilling any part-time bowling duties if needed.

With the two openers, and Kohli at number three, the remaining batting line-up picks itself. Jadhav, MS Dhoni and Ambati Rayudu will form the middle order, and there will be keen interest in the latter duo's form here.

Dhoni had an off-colour 2018, managing 275 runs in 20 ODIs at average 25 without a half-century. While this is a meagre return for a batsman of his stature, the worrying aspect is Dhoni's strike-rate of 71.42, which is remarkably lower than his ODI career strike-rate of 87.89.

India brought in Rayudu for the all-important number four role, and since the Asia Cup last September, have given him a long run in the middle order. In this interim, Rayudu scored 392 runs in 11 ODIs in the Asia Cup and against West Indies at average 56 including a hundred and three half-centuries.

While he put in a more consistent showing than any of the other previously tried contenders, this run came in conditions different from those in England.

As such, how Rayudu fares on this twin tour of Australia and New Zealand will be a closer representation of whether the Indian team has finally cracked the number four quandary.

Similar middle-order issues plagued the visitors when they last toured here for an ODI contest, losing 4-1 in January 2016 when Dhoni was still captain. Sharma and Kohli topped the charts with 441 and 381 runs in the five-match series, respectively, while Dhawan also scored 287 runs.

But there were no sizeable contributions from the middle, and only Manish Pandey's fighting hundred in the final ODI had saved India from a 5-0 scoreline.

India's ODI record in Australia is quite poor. Apart from the 1985 World Championship and 2008 CB Series wins, they have lost 35 out of 48 ODIs played against Australia on their home soil.

Australia have named their playing eleven ahead of the first ODI, with Nathan Lyon featuring as the lone spinner and Peter Siddle returning to this format for the first time since 2010. Keeper-batsman Alex Carey will open in ODI cricket for the first time, and will pair up with skipper Aaron Finch, while Usman Khawaja, Shaun Marsh and Peter Handscomb will form the middle order.

The hosts bat deep with Marcus Stoinis and Glenn Maxwell lined up at numbers six and seven, albeit their pace attack seems weak on paper. With Siddle returning to the format after eight years, left-arm pacer Jason Behrendorff will make his ODI debut on Saturday.