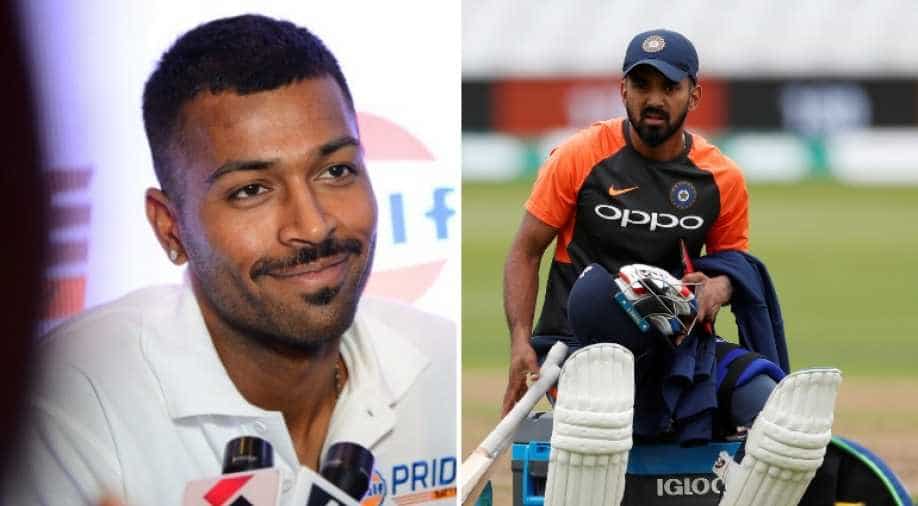 BCCI has suspended Hardik Pandya and Lokesh Rahul from all formats of cricket over sexist comments made on a TV show.

The Board of Control for Cricket in India (BCCI) has suspended all-rounder Hardik Pandya and batsman Lokesh Rahul from all formats of cricket over sexist comments made on a TV show.

Both the players were criticised and faced a major backlash on social forums for their misogynist comments and have been suspended pending an inquiry, ruling them out of the three-match ODI series against Australia beginning Saturday in Sydney.

The official mail sent to Hardik Pandya read, "You are aware that enquiry and proceeding against you for misconduct and indiscipline have been initiated under Rule 41 of the BCCI Constitution and the same are presently pending."

The statement further added, "In terms of Rule 41(6) of the BCCI Constitution, you are hereby suspended with immediate effect from participating in any manner whatsoever in any match or function or event or activity that is authorised, organised or sanctioned, organised and supported  in any way by the BCCI, the ICC or any State Association, until final adjudication of the matter."

While speaking on the eve of the first one-day clash against Australia, Indian skipper Virat Kohli said that the sexist comments made by his teammates Rahul and Pandya are "inappropriate" from Indian cricket team's the point of view.

He further added, "we definitely, as the Indian cricket team, do not support views like that and that has been communicated."

Meanwhile, Hotstar has taken down the episode of "Koffee With Karan" featuring cricketers Hardik Pandya and KL Rahul after it got widespread criticism for "inappropriate" comments by Pandya.

"Certain remarks/comments made by the guests on the episode 12 of Koffee with Karan may hurt the sentiments of our users/viewers. As a responsible platform, we have removed the episode from Hotstar with immediate effect," Hotstar tweeted on Friday.