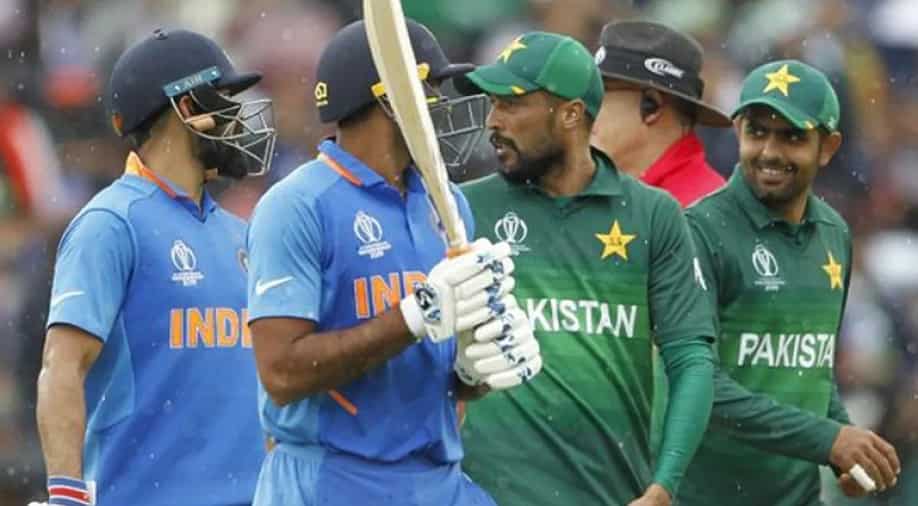 India are scheduled to take on Pakistan on October 24. Photograph:( IANS )

Amid calls for a boycott of the Pakistan clash at the T20 World Cup 2021 by many on social media, BCCI vice president Rajeev Shukla has said India can't refuse to play under ICC's commitments.

Ahead of Team India's much-anticipated clash against Pakistan at the T20 World Cup 2021, there have been demands for the cancellation of the game. Calls for a boycott of the match have been made on social media after the killings of civilians in Jammu & Kashmir by terrorists.

However, Board of Control for Cricket in India (BCCI) vice-president Rajeev Shukla has said India will have to play against Pakistan in the T20 World Cup as a team can't refuse to participate in a tournament organised by the International Cricket Council (ICC). Shukla said India can't refuse to take the field due to ICC's international commitments.

Union Minister Giriraj Singh had recently urged the government to 'reconsider' playing Pakistan in the T20 World Cup 2021. The match is scheduled to take place at the Dubai International Stadium in Dubai on October 24. It will be India's opening match at the showpiece event.

While condemning the targeted killings of civilians, the majority of whom were non-locals, Shukla said Team India can't back out of an ICC tournament.

" We strongly condemn the killings(J&K). Strict action should be taken against terror organisations. As far as the match (T20 WC IND vs PAK) is concerned, under ICC's international commitments you can't refuse to play against anyone. You've to play in ICC tournaments," Rajeev Shukla was quoted as saying by ANI.

India are placed in the Group 2 of the Super 12 stage in T20 World Cup 2021 and will lock horns with Pakistan in their opening game before taking on New Zealad and Afghanistan on October 31 and November 03 respectively. India last played Pakistan in the ODI World Cup in 2019.

The two teams have not played a bilateral series against each other since 2013 due to political tensions between the two nations.