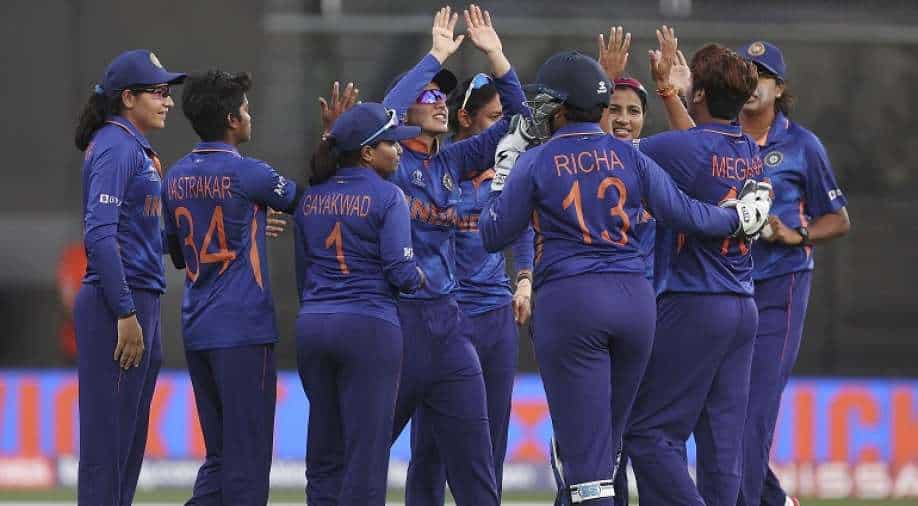 Indians produced a cohesive bowling effort to bundle out West Indies for 162 in 40.3 overs. Photograph:( AFP )

Smriti Mandhana and Harmanpreet Kaur slammed twin centuries as India produced a splendid batting display to notch up a comprehensive 155-run win over West Indies and bring their campaign back on track at the ICC Women's ODI World Cup here on Saturday.

While Mandhana smashed her fifth ODI hundred, a sensational 123 off 119 balls studded with 13 fours and two sixes, Kaur had 10 hits to the fence and two maximums in her 107-ball 109, which was her fourth ton and the first since hitting 171 not out against Australia in the 2017 World Cup.

The duo forged a 184-run stand for the fourth wicket, India's highest partnership for any wicket at the women's World Cup, to help the team post its highest total in the history of the showpiece event, a challenging 317 for eight after skipper Mithali Raj won the toss and elected to bat.

The 2017 edition finalists then returned to dismiss West Indies for 162 in 40.3 overs to keep themselves in contention for the knockout stage.

By virtue of this win, India now lead the eight-team standings with four points from three games, ahead of Australia, New Zealand and South Africa because of a better net run rate.

Chasing the stiff total, West Indies were off to a flier with openers Deandra Dottin (62) and Hayley Matthews (43) putting up 100 runs in 12.1 overs but the spin-pace duo of Sneh Rana (3/22) and Meghna Singh (2/27) put the breaks by rocking the top-order, as the Caribbeans slumped to 114 for four in 19th over.

Pooja Vastrakar (1/21) and Rajeshwari Gayakwad (1/24) then got into the act, removing Shemaine Campbelle (11) and Chinelle Henry (7) as the Windies slumped to 134 for six.

Gayakwad and Rana then combined to run-out Aaliyah Alleyne (4), while Jhulan Goswami (1/43) returned to get rid of Anisa Mohammed (2) and become the all-time highest wicket-taker in the women's World Cup with 40 wickets in her kitty.

Earlier, opener Yastika Bhatia scored a quick 31 off 21 balls, laced with six boundaries, to give the team a good start along with Mandhana.

Bhatia and Mandhana put on 49 runs for the opening stand in 6.3 overs but once she departed, Mithali Raj (5) and Deepti Sharma (15) also followed suit, leaving India tottering at 78 for three.

While Bhatia was caught and bowled by S Selman, Mithali was caught by Shamilia Connell at mid-wicket off Matthews in the 10th over.

India scored 62 for two in the powerplay with Deepti Sharma (15) making a promising start but Matthews took a one-handed stunner at first slip to get rid of the all-rounder.

Mandhana and Kaur then joined hands and steadied the innings as India amassed 100 runs in 20 overs. The duo picked the ones and twos and also got the boundaries regularly to keep the scoreboard ticking. Mandhana scored her first fifty off 66 balls with five fours in the 27th over, while the second fifty came in 43 balls.

The left-handed opener picked up her first maximum in the 33rd over when she produced a straight down the ground six off Selman. She smashed another six in the 37th over long-on off Aaliyah Alleyne.

With the two batter scoring at a good pace, 200 was up in the 36th over. Mandhana reached her 90s with a boundary and got a life when she was dropped by Alleyne on 96. She also survived an LBW appeal before reaching her century with another four off Matthews.

With Kaur also going great guns, India crossed the 250-mark in no time. Mandhana was dismissed in the 43rd over when she found Selman at deep mid-wicket but Kaur took the onus on herself and steered the team across the 300-mark even as India kept losing wickets in pursuit of quick runs.

Kaur, who also got a reprieve on 20, reached her three-figures with a single in the 47th over before edging an Alleyne delivery to keeper Campbell.