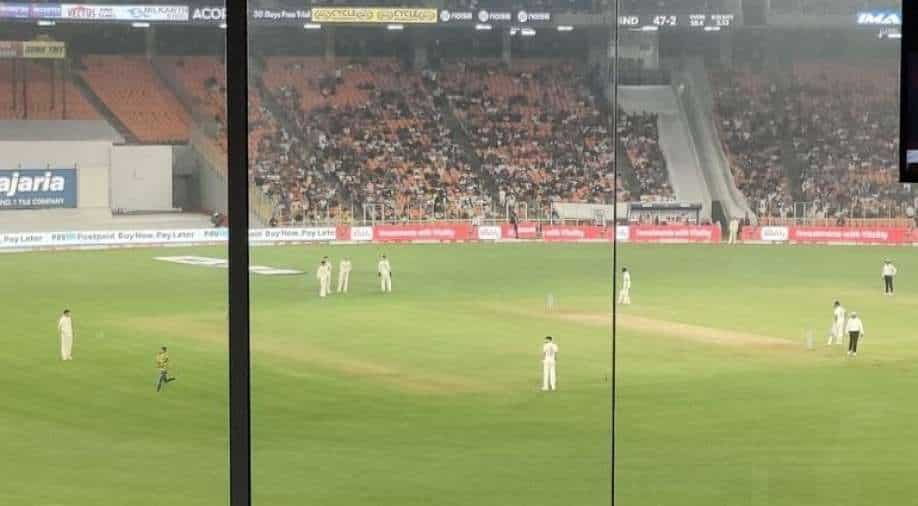 The incident was captured by WION's reporter, who is present at the Narendra Modi Stadium covering the third Test match.

It has been an eventful Day 1 for the pink ball Test match between India and England at the world's largest cricket stadium. The match is being played in the presence of 55,000 fans (50 per cent capacity).

With emotions running high, one of the fans breached the security to run onto the ground. Looking at the fan running towards the pitch, Indian skipper Virat Kohli quickly moved away from him. Observing Kohli's reaction the fan decided to run back into the stands.

The incident was captured by WION's reporter, who is present at the Narendra Modi Stadium covering the third Test match.

Fan breaches security to run onto the ground. Virat Kohli instantly moves away from him. Looking at it, the fan ran back. Crowd roars.#INDvENG pic.twitter.com/RUzlZJ9E8e

India stayed on top on Day 1 of the third Test against England. Local boy Axar Patel bagged six wickets to restrict visitors to 112 runs. England Opener Zak Crawley scored the most runs for the team (53 runs).

India will now look to play the twilight phase with cautiousness and get a good total on board. With the series locked at 1-1, India would be itching to take a series lead heading into the final Test, which will be played at the same venue – Narendra Modi Stadium in Ahmedabad.