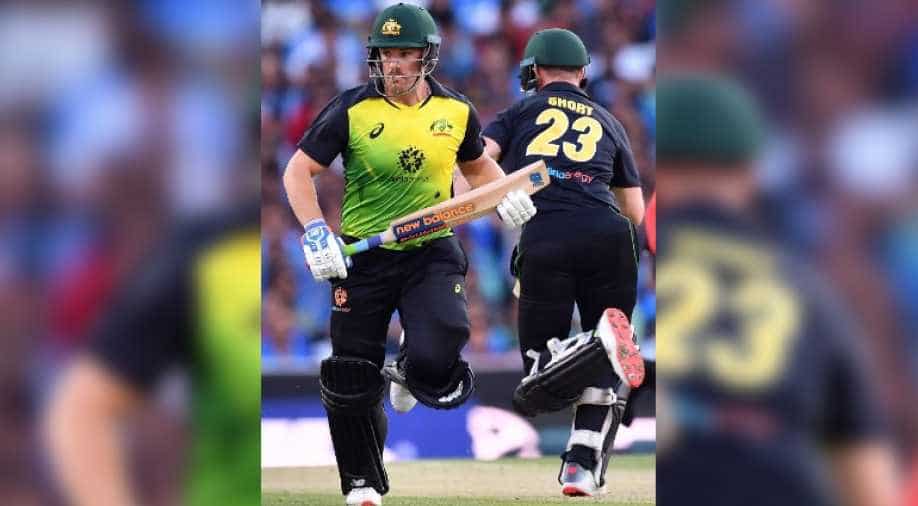 India need 165 to win the third T20I against Australia.

Chasing Australia's 165-run target, India were 92 for the loss of two wickets with KL Rahul and skipper Virat Kohli at standing unbeaten at nine and 14 runs respectively.

Dhawan-Rohit partnership put pressure on the Australian bowling attack. Both the openers got off to a flying start before Mitchell Starc dismissed the Shikhar Dhawan for 41 (22 balls).

India lost the second wicket in 7th over, Adam Zampa clean bowled Rohit Sharma with a quicker length ball that ripped through Sharma which he failed to assess.

Earlier, Krunal Pandya snatched four precious wickets to slow Australia's run rate in the third and final T20I but due to India's poor fielding, the hosts managed to put up a defendable total of 164 runs against India.

After winning the toss, Australia started off the innings well as both the openers D Arcy short and Aaron Finch looked in control but after Finch's wicket, Aussies lost their momentum.

Pandya struck against and outbowled Ben McDermott on the next ball.

Krunal Pandya was the most economical bowler for India as he took the most prized wicket of Glenn Maxwell.

Aaron Finch-led Australia are leading the three-match series 1-0 after winning the first match at Brisbane, while the second match was called off due to heavy rains in Melbourne on Friday.

After winning the toss, Finch said, "Looks a pretty good wicket, a bit dry and if we can put runs on the board, we are backing ourselves to defend anything,"

Australian pace spearhead has been Mitchell Starc called up for his first Twenty20 international in two years. He replaced Jason Behrendorff.

Stanlake was ruled out of the series decider after sustaining an ankle injury in the warm-up before the washed-out second T20I.