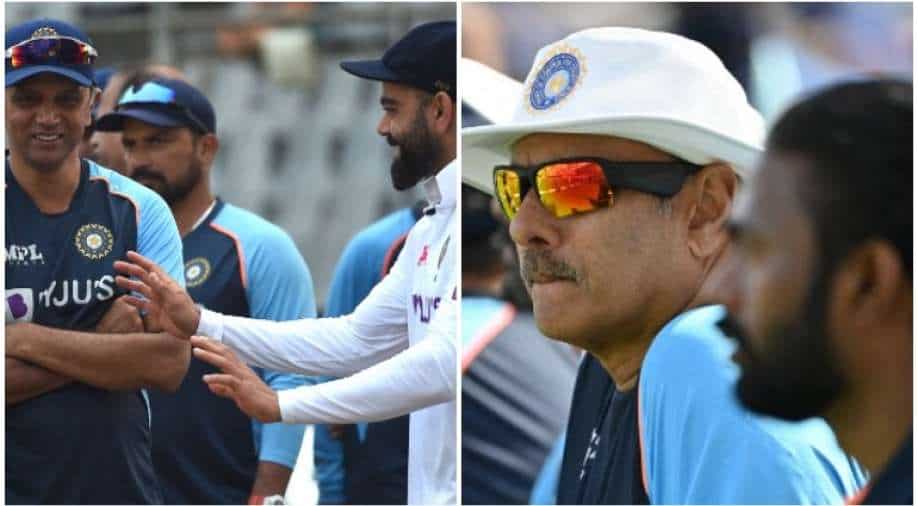 With so many changes taking place in Indian cricket at the moment, ex-head coach Ravi Shastri has shared a word of advice for his successor Rahul Dravid.

A lot of things have transpired in Indian cricket following their tour of England and IPL 2021. Since the T20 World Cup debacle, in the UAE, Ravi Shastri's tenure as head coach ended and he was replaced by Rahul Dravid. With Dravid stepping in, plethora of changes have taken place in the leadership group.

While Virat Kohli was set to step down as the T20I captain post the World Cup, he was sacked as the ODI captain with Rohit Sharma replacing him as the white-ball skipper. During the South Africa tour, Kohli also stepped down as the Test captain following the red-ball series. Thus, the upcoming months are a tough and dicey period for Indian cricket, which is undergoing a transition in the senior men's team.

Many veteran players such as Cheteshwar Pujara, Ajinkya Rahane, Ishant Sharma, Bhuvneshwar Kumar, etc. are also fighting for their spots due to intense competition with the younger bunch of players and their own dip in form. Thus, Shastri opened up on the transition period in Indian cricket and shared a word of advice for his successor Dravid.

ALSO READ | It'll do him a world of good: Ex-head coach Ravi Shastri suggests how Virat Kohli can rejuvenate his form

Talking on Shoaib Akhtar's Youtube channel, Shastri said, “It’s a very important period for Indian cricket, there will be a period of transition in the next 8-10 months. It’s important to identify the right kind of players who will take you forward in 4-5 years. I always believe that there should be a mix between youth and experience.

"Sometimes change is needed if you aim for the future. This is the time. They need to look for youth in the next six months, need to be quick. If you stick with the same for too long a period then the adjustment will be very difficult," he opined.

Dravid-Rohit-led Indian team is currently gearing up for their upcoming white-ball series versus Kieron Pollard-led West Indies at home. They will play three ODIs and T20Is, each, before hosting Sri Lanka in two Tests and three T20Is. The action will then shift to the IPL 2022 edition.